Some US Colleges Offer Full Scholarships to Gamers

Update Required To play the media you will need to either update your browser to a recent version or update your Flash plugin.
By Bryan Lynn
31 July, 2018


Most Americans would never put an activity like video gaming in the same group with a physically demanding sport like football or basketball.

But gaming has reached such a high level of competition that some schools are now offering what are being called full "esports" scholarships. They provide financial aid to students who play for their esports teams.

Just like members of college sports teams across the country, the varsity esports players can receive money for their schooling and housing. The 16 are known as competitive gamers.

While many gamers enjoy playing on gaming systems like Xbox or Playstation, most competitive esports are played on personal computers. Among the top games are League of Legends, Overwatch, Counter-Strike: Global Offensive, Dota 2 and Hearthstone. 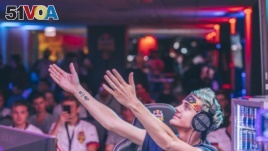 Esports programs are set up like most other college or university sports teams. They have a coach who helps to train the players, a manager who directs the team and a series of competitive events against other teams.

Geoffrey Wang is the head coach for Harrisburg University's esports team – called the Storm. In a statement announcing the varsity players, he said the final 16 were chosen from about 500 people from around the world.

The team represents highly "talented individuals who have all stood out as some of the top players in their respective titles," Wang said.

Wang says that since Harrisburg University offers classes in science and technology, it is a good choice for gamers looking to combine education and esports.

"We want all of our students to be able to succeed academically, and then competitively as well."

Eric Darr is the president of Harrisburg University. He told VOA the school is pleased to offer gamers the same possibilities that many talented players in other sports already receive.

"So here's an opportunity to come to a great university and get a great degree in science and technology, while continuing to be a great gamer."

Twenty-year-old Grayson O'Connell is a student at Harrisburg University. He is studying computer technology and machine learning. After class, his homework usually includes plenty of gaming time.

O'Connell says he has always been competitive, even as a child. But he felt like he couldn't play traditional sports because many of them involve a lot of money.

"I played hockey, but I really wasn't able to play anything else because it consumed my time and my parent's expenses. So video games ended up being what I used to play competitively."

O'Connell said his parents have no issues with his choice of esports.

"My parents were very supportive of that and when they started seeing that school was actually rewarding people for being talented at certain games like that, they were fully on board with me."

Harrisburg University held a week-long program for high school students interested in being competitive gamers. One of the attendees was 15-year-old Justin Bahata, who seemed to have the right aim for a future varsity player.

"I don't play video games really to have fun, I play them more to win. So then coming here, esports, that's really what I wanted to do."

In September, Harrisburg University will hold a major esports competition. At least 32 varsity teams from across the nation will take part. The competition will be an official event of the National Association of Collegiate Esports.

The association seeks to help American colleges develop esports programs and scholarships. The group recently announced it will hold national championships in November for players of the games Smite and Paladins. The winner of each of those championships will receive $50,000 in scholarship prizes.

Bryan Lynn wrote this story for VOA Learning English, based on reports from VOA News and other online sources. George Grow was the editor.

varsity – n. the main team of a college, school, or group in a sport

academic – adj. of or relating to a school

opportunity – n. situation in which it is possible for a person to do something

degree – n. a special honor or recognition given to a student on completing a study program

expense – n. amount of money needed or used to do or buy something

rewarding – adj. giving you a good feeling that you have done something valuable or important