Some US Schools Slow Diversity Programs after Opposition

Update Required To play the media you will need to either update your browser to a recent version or update your Flash plugin.
By Dan Novak
22 February 2022


Conservative local school boards in the United States have already moved to control how history and race is taught in public schools. Now, some school districts are also finding their larger efforts on diversity, equity and inclusion challenged by local officials.

A school board is a group of elected officials who supervise a school district's budget and educational decisions.

Alexis Knox-Miller is the equity director at Colorado Springs School District 11, a large and diverse system of 26,000 students. The district was the first in the area to create a formal equity policy. 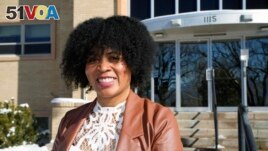 The policy was approved with no opposing votes in May 2020, just two days after the killing of George Floyd in Minnesota. That event led to nationwide reflections on the state of race and social justice issues in society, as well as in schools.

Knox-Miller helped launch a study by the American Institutes for Research. It found that schools with high numbers of special education students, English language learners, students living in poverty and students of color were scoring lower than other schools. Knox-Miller thought the results demonstrated a big need for policies aimed at ensuring that all students had the same opportunities.

But critics questioned the study's findings and how they were presented. Conservative candidates ran for the school board and won three seats, giving them a majority. The winning candidates had voiced concerns about equity policies. So Knox-Miller decided to end her work after more than a year of meetings.

American educators say they are feeling the effects of deep divides surrounding the issues of diversity and equity in schools. After George Floyd's killing in 2020, many districts increased efforts to make schools more inclusive places for students and employees of all backgrounds. But intense debate over how schools deal with race is leading some districts to rethink or withdraw plans.

"People were conflating the definition of equity with critical race theory," Knox-Miller said.

However, that has done little to change the minds of opponents. They say school systems are misspending money, creating racial divisions and shaming white children by supporting programs they view as critical race theory in disguise.

Such criticism has led some districts to stop proposals aimed at making schools more welcoming places for students from diverse backgrounds. Work elsewhere has been affected by heated debates about subjects that have been misrepresented as critical race theory.

In a political climate that has already led to arguments over pandemic restrictions and vaccine requirements, equity programs are struggling at some schools, said Dan Domenech. He is the director of the American Association of School Administrators.

Districts are "thinking twice about what they say and what they do and how they go about doing it because it is having a chilling effect on the whole equity, diversity and inclusion movement," Domenech said.

Virginia-based group Parents Defending Education has been critical of diversity, equity and inclusion policies. The organization seeks to identify examples of what it sees as problematic programs. On its website, the group identifies one of its goals as fighting "indoctrination in the classroom." The organization also seeks a "restoration of a healthy, non-political education."

In Southlake, Texas, near Dallas, the newly-elected conservative majority on the Carroll Independent School District's board killed a diversity action plan in December. The board also ended a diversity planning group as part of a legal settlement.

Still, many other programs are continuing as planned.

An equity program that schools in Clayton County, Georgia, worked on more than a year ago was designed to keep politics and emotions out of it, said Superintendent Morcease Beasley. Leaders of the equity group say they plan to use data to drive any policy changes.

"That's what equity is about," Beasley told the AP. "Where are the needs? Who needs the resources? What do they need?"

diversity — n. the quality or state of having many different forms, types, ideas, etc.

challenge — n. to say or show that (something) may not be true, correct, or legal

reflection — n. an image that is seen in a mirror or on a shiny surface

conflate — v. combine two or more ideas into one

disguise — n. to change the usual appearance, sound, taste, etc., of so that people will not recognize that person or thing

restoration — n. the act or process of returning something to its original condition by repairing it, cleaning it, etc.