Update Required To play the media you will need to either update your browser to a recent version or update your Flash plugin.
By Christopher Jones-Cruise
25 June, 2016


Some young Arabs want Islam, the religion of Muslims, to be separated from politics and governments in Middle Eastern countries.

Faisal Saeed Al-Mutar is a writer and humanist. He is a former refugee from Iraq. He created the Global Secular Humanist Movement in 2009 to support human interests and the worth of individuals without relying on religion.

He recently spoke to VOA about the importance of supporting those who want religion to be separated from government. 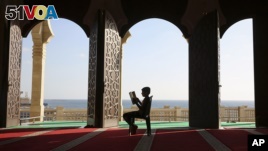 A Palestinian youth reads verses of the Quran, Islam's holy book, during the holy Islamic month of Ramadan at the beach side Mosque in Gaza City, June 9, 2016. (AP Photo/Adel Hana)

"There is a growing number of Arab millennials between 20 and 30 who are advocating for human rights and secular liberal values," Faisal said. "I think that the United States and the West should stand in solidarity with these people."

Faisal says politics in the Middle East is a problem. He notes that in many Arab countries homosexuals can be executed.

He does not believe Islam will accept homosexuality. He says both the Islamic State and Al-Qaida terror groups use their religious beliefs to justify killing homosexuals by throwing them from tall buildings.

On his Facebook page, Faisal said if religions do not change to accept homosexual and women's rights, "then religions need to die, not people."

VOA Correspondent Esha Sarai reported this story from Washington. Christopher Jones-Cruise adapted it for Learning English. Hai Do was the editor.

humanist – adj. a person who believes in a system of values and beliefs that is based on the idea that people are basically good and that problems can be solved using reason instead of religion

secular – adj. not spiritual; of or relating to the physical world and not the spiritual world

millennial – adj. a person reaching young adulthood around the year 2000

advocate – v. to support or argue for (a cause, policy, etc.)

justify – v. to provide a good reason for the actions of (someone)