Sometimes It Pays to Disobey

Update Required To play the media you will need to either update your browser to a recent version or update your Flash plugin.
By Dorothy Gundy
04 April, 2017


Most people would say they disapprove of breaking rules. But one highly respected university in America is offering a big prize for exactly that.

The Media Lab at the Massachusetts Institute of Technology in Cambridge will award $250,000 to an individual or a group for breaking rules. One condition, however: the disobedience must help society.

The MIT Media Lab is seeking nominations for candidates from all over the world. The best candidates are doing or have done difficult and important work that is not always recognized.

The award is open to people in all fields, including science, politics, law, journalism, medicine and human rights. The Media Lab is looking for rule breakers who have taken a personal risk to help society. 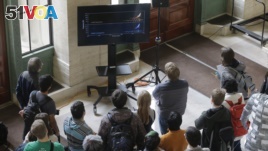 Massachusetts Institute of Technology students gather around a monitor in an overflow area on the MIT campus to watch an update by scientists on the discovery of gravitational waves, Thursday, Feb. 11, 2016,

The award is the first of its kind at the school.

Joi Ito directs the Media Lab at MIT. He says, "You don't change the world by doing what you're told."

But, he says he is not suggesting people break laws or rules without reason.

"Sometimes we have to go to first principles and consider whether the laws or rules are fair, and whether we should question them," he says.

"The American civil rights movement wouldn't have happened without civil disobedience. India would not have achieved independence without the pacifist but firm disobedience of Gandhi and his followers. The Boston Tea Party, which we celebrate here in New England, was also quite disobedient."

Media Lab says the award will not support acts of violence, terrorism or dangerous behavior.

Reid Hoffman is an entrepreneur and co-founder of the social network, LinkedIn. He is donating the $250,000 in prize money.

The nominating period will be open until May 1. Anybody may nominate an individual or group for the award. Self-nomination is not permitted. Nominations will be accepted on the MIT Media Lab Rewarding Disobedience webpage.

Media Lab will present the winner or winners with the prize at a ceremony July 21. A short list of candidates will be announced before the event in Massachusetts.

Dorothy Gundy reported on this story for Learning English. Caty Weaver was the editor.

principles – n. a moral rule or belief that helps you know what is right and wrong and that influences your actions

achieved - v. to have gotten or reached (something) by working hard; to have become successful by reaching a goal

pacifist - n. someone who believes that war and violence are wrong and who refuses to participate in or support a war

New England - n. region in the U.S. including the states of Maine, New Hampshire, Vermont, Massachusetts, Rhode Island, and Connecticut