Son, Father Farm to Feed Neighbors During Lockdown in India

Update Required To play the media you will need to either update your browser to a recent version or update your Flash plugin.
By Susan Shand
25 November 2020


The garden that Sijo Zachariah and his father planted was a way to make sure their family had food to eat during the coronavirus pandemic.

But the garden became much more. It became a way to help their community. It also led Zachariah to change the direction of his life.

The 22-year-old aircraft engineer had been living in Dubai in the United Arab Emirates. But he was in the southwestern Indian state of Kerala for a family wedding when the government shut down the area as the coronavirus spread. 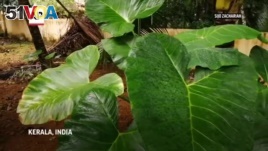 Son, Father Farm to Feed Neighbors During Lockdown in India

"What's going to happen?" he thought. "You know, how are we going to feed ourselves?"

Food stores in the area were nearly empty. Places that sold plants for gardening were closed. So, Zachariah and his father collected seeds from whatever fruits and vegetables they could find and planted them on their family's land. They already had some plants growing, but they added many more.

The father and son watched YouTube videos to learn about gardening. They also remembered information that Zachariah's grandfather had passed down to his father.

Over time, the garden would help feed 20 other families during the pandemic.

"We started teaching others how to grow their own crops so that everyone can have some sort of crop growing in the land," he said.

Kerala's climate is tropical. That means it has a lot of rain and sun, making farming easier.

Zachariah became interested in permaculture -- a movement that says farming should work with nature instead of trying to control the land.

Zachariah came to understand that the food was fresher. It came from local farms and was not treated with chemicals before traveling by truck or plane to be sold far away.

Zachariah is now considering a new profession: farming. He connected with other people online who are thinking of a future in farming as well.

He said, "There's many people like me who are genuinely curious or genuinely want to do something, but they are stuck somewhere, with their work or in a city life."

Zachariah has left the farm in the hands of his neighbors since returning to Dubai. He has decided to become a farmer.

"It's a big change for me. But this is what makes me happy — helping others and being in nature," he said.

There is one more reason he was happy with his farming life.

"I was getting quality time with my dad as well, so it was like a win-win," he said.

tropical – adj. the part of the world that is near the equator where the weather is very warm

permaculture - n. a study of plant life, ecology and sustainability