Once a month, Abdullah waits near Cairo's infamous Tora prison for hours. He stands under the hot Egyptian sun for a chance to see his father.

Morsi, an Islamist, served one year in office. His term ended with a military ouster in 2013.

His son Abdullah told The Associated Press."I won't sit on the ground while I wait, it's not dignified. I know they will deny my request, but I still have to try."

Morsi's family is working to see the former president more often. Since the ouster, he has appeared only in court, where he usually stands in a large, soundproof structure.

The family says the 67-year-old Morsi is suffering from poor health because of conditions in the prison. He has spent years alone in his jail room. Last month, the family was given permission for a police-supervised, 25-minute visit. It was only the third time family members have seen him since his detention.

Abdullah Morsi said, "He has no idea what's going on in the country since he was arrested. They don't allow him newspapers or even a pen and paper to write down his thoughts." He added that his father sleeps on the floor and needs medical attention for health problems, including high blood pressure. 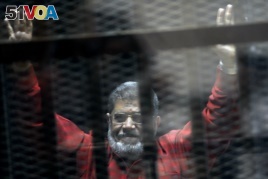 FILE - In this June 21, 2015 file photo, former Egyptian President Mohammed Morsi, wearing a red jumpsuit that designates he has been sentenced to death, raises his hands inside a defendants cage

Restrictions on the son

Abdullah Morsi studies finance, but says he has little chance of finding work in Egypt. Most businesses are afraid to employ him, or they ask for approval from state security.

He has no passport, only an identity document. He asked for a driver's permit, but was refused. The court recently sentenced his older brother Osama to 10 years in prison in a trial that Amnesty International denounced as a "mockery of justice." He and the others who were accused were found guilty of inciting violence at a pro-Morsi demonstration. Police attacked the crowd and killed hundreds of protestors.

The Egyptian government has put most of his family on a terrorism watch list and banned them from public life. As a result, the campaign to improve Morsi's prison conditions is now organized from London, where some important British politicians have voiced support.

Abdullah said of his father, "I am not fighting for anything here except for his rights."

Mohamed Morsi won Egypt's first and possibly only free presidential election in 2012. A year later, he was overthrown by his own defense minister, now President Abdel-Fattah el-Sissi. Morsi is not permitted to speak publicly and has only seen his lawyers four times.

In Egypt, prisoners are usually given permission for family visits, but they can be denied at any time. This appears to be what happened to Morsi. His family has not been given any official information.

During his year in office, Morsi's opponents accused the Muslim Brotherhood of trying to use election victories to control the state. Morsi used his presidential powers to force policy changes in Egypt, but could not get control of the courts and police. Finally, his opponents launched large demonstrations against him until el-Sissi came to power.

Since then, the government has declared the Brotherhood a terrorist organization and worked hard to destroy it. Tens of thousands of Egyptians have been arrested since 2013. Most have been accused of working with or for the Brotherhood, says the Tahrir Institute for Middle East Policy. The group is based in the United States.

Morsi still considers himself Egypt's rightful president. He does not recognize the charges against him, which include treason and incitement to violence. He has been sentenced to 20 years after being found guilty of ordering Brotherhood members to stop a protest against him, which resulted in deaths. An earlier death sentence was overturned. He faces additional charges.

Morsi is held in a special area of the Tora detention center. Rights groups say its conditions are far worse than those in other jails, both in Egypt and around the world. Egyptian officials deny mistreating prisoners.

The government has called the Brotherhood a terrorist organization. Officials have even tried to link it to a group allied with the Islamic State.

Abdullah said, "The terrorism claims, that's all theater — it's the only way they can explain what they did to my father."

The United States and Europe have all but accepted el-Sissi's state security and done little to criticize operations against the opposition. Instead, they have called him an important partner in the Middle East and sold his country arms. El-Sissi won re-election this year in a race without serious competitors.

Abdullah and his family want Morsi to be treated more like longtime Egyptian leader Hosni Mubarak, who never went to prison. Mubarak was held in a military hospital. After several trials, he was freed last year.

Abdullah said, "When my father was in charge, Mubarak was never held in such conditions, my father respected human rights." He added that his father wants only the same treatment as Mubarak.

Brian Rohan reported this story for the Associated Press. Susan Shand adapted his story for VOA Learning English. George Grow was the editor.

soundproof - adj. not permitting sound to enter or leave

mockery – n. behavior or speech that makes fun of someone or something in a hurtful way