Update Required To play the media you will need to either update your browser to a recent version or update your Flash plugin.
By Bryan Lynn
08 January 2022


Japan's Sony Group says it plans to launch a company this spring to explore entering the electric vehicle (EV) market.

Sony's president and chairman, Kenichiro Yoshida, announced the plans Wednesday in the United States. He was speaking at the start of the CES technology conference in Las Vegas, Nevada.

The new company, called Sony Mobility Inc., also aims "to make the best use of artificial intelligence (AI) and robotics technologies," Sony said in a statement. It will seek to "help realize a world where everyone can live in harmony with robots on a daily basis," the statement added. 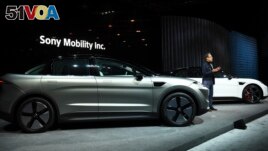 Sony said its imaging, sensing and entertainment technologies put the company in a good position "to redefine mobility," Yoshida said. Such technologies are expected to play an important part in the operations of self-driving vehicles.

During his presentation, Yoshida introduced a new electric vehicle model, called the VISION-S 02. He said the vehicle is based on the same technology as the VISION-S 01, a model presented at the CES conference in 2020.

Sony said it started road testing the VISION-S 01 in Europe in December 2020. And it has carried out tests on the vehicle's imaging, sensing and safety systems. The company has the same plans for its VISION-S 02.

Yoshida told reporters the company sees mobility as an "entertainment space" where passengers can choose individualized entertainment and connect using 5G. 5G is the next generation of high-speed wireless technology.

Many large automobile manufacturers worldwide are investing heavily in electric vehicle technology. American-based electric car maker Tesla has risen to become the world's most valuable automobile company. In Japan, Toyota Motor Corporation announced in December it planned to invest $70 billion to electrify its automobiles by 2030.

Many investors also expect iPhone maker Apple to launch an electric vehicle within the next few years.

Meanwhile, a U.S. company based in Michigan said this week that it had tested a version of a new battery. The device was able to power a vehicle for 1,210 kilometers on a single charge. The test was carried out in a Tesla Model S vehicle.

The company, Our Next Energy (ONE), says it plans to begin producing batteries with a similar ability by late 2023.

The company has worked to develop a long-distance battery that uses safer and more sustainable materials. The batteries are designed to contain more energy in a smaller, less costly space.

Ijaz has 30 years of industry experience in developing battery systems for electric cars. He formerly led such projects for Apple and battery maker A123 Systems.

He said the company aims to remove in-demand metals such as nickel and cobalt from its batteries, without losing energy density. "We aim to re-invent battery chemistry as well as the cell architecture" to be able to reach 1,210 kilometers of distance between charges, Ijaz told Reuters.

Bryan Lynn wrote this story for VOA Learning English, based on reports from Reuters, The Associated Press and Industry materials.

harmony – n. a situation in which people are peaceful and agree with each other

entertainment – n. shows, films, television or other performances or activities that entertain people

mobility – n. the ability to move freely or be easily moved

battery – n. a device that provides and stores electricity for things

charge –n. an amount of electricity that is usually contained in a device such as a battery

architecture – n. the design and appearance of something