Sorry to ‘Rain on Your Parade’

Update Required To play the media you will need to either update your browser to a recent version or update your Flash plugin.
By Anna Matteo
22 June, 2019

We talk about them a little more in depth. We give you examples on when and how to use them. We also give you a little backstory on how the expressions began.

Now, today we talk about something found everywhere in the world: rain.

If you have ever planned an outdoor party or picnic, you know that nothing puts a damper on outdoor fun like rain! In other words, rain can limit your fun – or even make you cancel your party.

So, that is the theme of today's show – ruining a good time, or to use a weather expression, raining on someone's parade.

To understand this expression, we first need to talk about a parade.

A lot of planning goes into a parade. It often involves richly decorated vehicles and marching bands with valuable instruments. Some parade floats -- as the decorated vehicles are called -- have speakers and expensive electronics. Sometimes famous people travel in parades, waving from the open tops of fancy convertible cars. Streets are closed and people line the sidewalks to watch. 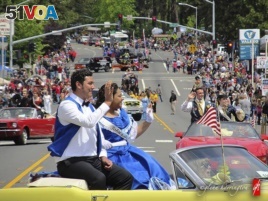 This 2015 photo shows the Gold Nugget Days parade moving along the street in Paradise, Calif. In the spring the town celebrates Gold Nugget Days, marking the discovery of a 54-pound nugget in 1859. (Photo Glenn Harrington)

Whether in a big city or small town, rain on parade day affects everything! That is why the expression "to rain on someone's parade" means we lessen someone's excitement or fun.

Or worse. Maybe we even ruin their plans.

They are really looking forward to something and we pop their balloon – another expression meaning to ruin someone's good time. Imagine if you will, a child playing with a balloon and you came along and popped it. The good time playing with the balloon is over.

Now, usually we do not like to pop someone's balloon or rain on someone's parade. We do not want to be called a wet blanket. This is someone who ruins a very good time and brings everybody down. Imagine, again, curling up on a cold day with a wet blanket. Yuck.

Besides "wet blanket," we have other names to call these people who can ruin a good time. We can call them buzz kill, killjoy, party pooper, stick-in-the-mud, a drag or simply a downer. Those names are all interchangeable. However, if you need one to use in a more formal situation, do not pick "buzzkill" or "party pooper."

While all of those names can describe a person, we can also use "drag," "downer" and sometimes "buzzkill" to refer to the event.

Knowing when to use these expressions is important. So, let's go back to our parade expression. We often use "rain on someone's parade" when we give bad but not very serious news.

Now, let's hear these two classmates use it in a conversation.

A: Hey, do you want to come over tonight and study for our exam?

B: No. I'm going out with some friends tonight. Besides, didn't you hear? Our exam has been rescheduled for next week.

A: Where did you hear that?

B: From Theo. He told me yesterday.

A: And you believed him?

B: Well, yeah. And I invited some friends to town. We're going out to dinner and then a movie. I already made reservations and bought the tickets.

A: Well, I hate to rain on your parade, but, as usual, Theo doesn't know what he's talking about. I just talked to our teacher and our exam is definitely tomorrow.

B: Urgh! Wait until I see Theo!

If you do not want to use this parade expression, you can also simply say, "I hate to break it to you, but ..." and then you break, or tell, the bad news.

On that note, I hate to rain on your parade but that is the end of this Words and Their Stories.

Anna Matteo wrote this story. Kelly Jean Kelly was the editor. The song at the end is Idina Menzel singing "Don't Rain on My Parade," courtesy of The Kennedy Center.

damper – n. something that discourages or deadens

float – n. a vehicle with a platform used to carry an exhibit in a parade

interchangeable – adj. capable of being used in place of each other