Update Required To play the media you will need to either update your browser to a recent version or update your Flash plugin.
By VOA
02 May, 2015

Different people have different ways of saying things – their own special expressions. Each week we tell about some popular American expressions.

What you are listening to is a call for help. It is the Morse code distress signal S.O.S. For years, telegraph operators used Morse code to communicate across the country and around the world.

A skilled operator could send and receive 30 or 40 words a minute. In the language of Morse code, the letter "S" is three short dots and the letter "O" is three longer dashes. Put them together and you have S.O.S.

These sounds represent the international call for help because they are easy to recognize. Now, it is simply known as S.O.S. 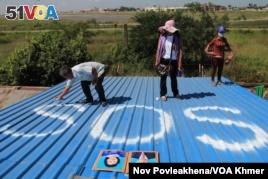 S.O.S. is the international call for help. These people in Cambodia write "SOS" on a roof so that planes flying overhead will see it and send help. (Nov. 2014 PHOTO by Povleakhena/VOA Khmer)

But many people think that S.O.S. stands for "Save Our Ship" or "Save Our Souls." It does not. S.O.S. has come to mean that because of how we use it – when we need to be saved, as when a ship is sinking.

S.O.S. is an example of a new, if somewhat unofficial, word in the English language. We call it a backronym. A backronym is a combination of two words: backward and acronym.

An acronym is an abbreviation, a shorter version of a long word or expression. For example, the word "scuba" is an acronym. It stands for self-contained underwater breathing apparatus. But scuba is so much easier to say!

Backronyms, on the other hand, are built in the opposite way. They are made by creating a phrase or expression for an already existing word or acronym.

For example, the United States Department of Justice recently gave new meaning to its Amber Alert program. Now, Amber officially stands for "America's Missing: Broadcast Emergency Response." But the program was originally named for Amber Hagerman, a nine-year-old girl who was kidnapped and murdered in Texas in 1996.

Sometimes, backronyms come from outdated language. Writing "CC" at the end of a document once meant "carbon copy." Before computers and email, people would often make a carbon copy of a letter they sent on official business. These days we often send electronic copies of letters by email, not carbon copies. So, "CC" is now a backronym that means "courtesy copy"

Americans often use backronyms as jokes. For example, NASA, the U.S. space agency, named a treadmill on the International Space Station after the television personality Stephen Colbert. The agency created the name "Combined Operational Load-Bearing External Resistance Treadmill" to spell out the name COLBERT.

Who says scientists lack a sense of humor?

Do not worry if you have never heard of backronyms. Many Americans have not either. The earliest known use of "backronym" appeared in The Washington Post in 1983.

The newspaper asked readers to send in a new word. Editors picked Meredith G. Williams as the winner with her word, "backronym," spelled with or without a "k." She defined backronym, as the "same as an acronym, except that the words were chosen to fit the letters."

And that brings us to the end of this Words and Their Stories program.

Hmmm, "ANNA" could be a backronym for "Another Newscaster Named Anna."