South Africa’s Cape Malay Curry Is Worth a Try

Update Required To play the media you will need to either update your browser to a recent version or update your Flash plugin.
By Ashley Thompson
29 April 2022


Many places around the world are known for their curry dishes. Curry is a kind of sauce that is highly seasoned and sometimes spicy. The sauce is usually combined with vegetables and meat and served over rice.

Some of the best-known curries come from India and Thailand. Other countries in Asia, including Indonesia and Japan, also have their own special curry dishes.

South Africa is not so well known for its curry. But food expert Christopher Kimball recently praised a curry he found in Cape Town. He wrote recently about the dish, called Cape Malay, in a piece for The Associated Press. 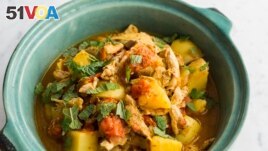 Kimball describes Cape Malay curry as somewhat similar to Indian curry. But it is lighter in flavor, or taste.

Kimball learned about making the dish from cooking teacher Faldela Tolker. She told him the spices used in Cape Malay curry are similar to those in Indian curry, but they are used differently. They are not ground fine, like they are in Indian curry. Cape Malay Curry uses the whole form of each spice. After the sauce is cooked, the individual pieces of spice are removed.

The result is a lighter, brighter, milder curry than most people are used to, Kimball notes.

Here is how you can make Cape Malay curry for yourself.

First, mix spices together. You will need 15 milliliters (mL) each of whole fennel and cumin seeds, and five mL each of turmeric, salt and pepper. Put about 15 mL of the spice mixture onto uncooked chicken. Boneless, skinless chicken pieces called thighs work best, Kimball says.

Next, heat some cooking oil in a large pan. Add two medium-sized onions, cut into small pieces. Cook them for 8 to 10 minutes until they are lightly browned. Then add in four cloves of chopped garlic, two serrano chili peppers cut in half, and about 100 grams of fresh ginger. About 30 seconds later, add in about 500 mL of chicken broth and 500 mL of cherry tomatoes, along with two whole cinnamon sticks, two bay leaves and the rest of the spice mixture you prepared earlier. Then, add the chicken thighs to the pan. Make sure the chicken is covered with the liquid.

Bring the liquid to a simmer, then cover and cook for 25 minutes. Stir in about half a kilogram of potatoes, cut into small pieces. Cover the pan again and return to a simmer. Cook until the chicken and potatoes are soft, another 12 to 15 minutes.

Safely remove the chicken from the pan and put it onto a large plate. Remove the ginger, cinnamon sticks, bay leaves and chili halves. Continue to simmer over medium heat for another five minutes.

Pull the chicken into bite-size pieces, then return it to the pan and stir to combine. Stir in juice from one lemon, then taste the mixture and add additional salt and pepper if needed.

After the cooking is finished, pour the curry mixture into a serving bowl and put fresh mint on top. Serve over basmati or jasmine rice.

The lemony, richly flavored curry takes about one hour to prepare and serves six people.

broth - n. liquid in which food (such as meat) has been cooked

simmer -v. to cook (something) so that it is almost boiling for a certain period of time

30mL grapeseed or other cooking oil