Update Required To play the media you will need to either update your browser to a recent version or update your Flash plugin.
By Jonathan Evans
25 October 2021


The large Itaipu dam, between Paraguay and Brazil, is facing an energy production crisis because of record low river and rainfall levels. Experts say those low levels could last into 2022.

Hugo Zarate is head of operations at the Itaipu dam. He told Reuters "we have available power, what we don't have is water to sustain that power for a long time." He added that the dam was "meeting the demand, but for short periods of time." 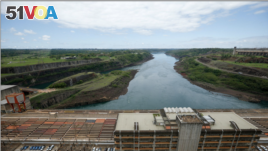 A view of the Itaipu Hydroelectric dam from the Paraguayan side, one the world's largest operational electricity generator which is facing an energy crunch as low river levels hit electricity production, in Hernandarias, Paraguay October 11, 2021.

Zarate estimated that energy production at Itaipu would be between 65,000 and 67,000 gigawatt hours this year.

The low levels affected both power production and the money the countries receive for the use of the water.

The drought, or severe lack of water, is one of the worst in the last 100 years. Brazil's government has asked its citizens to reduce their use of electricity and water.

The drought has also affected production at the Yacyreta dam, between Paraguay and Argentina. Yacyreta produced half the normal level of energy in September.

Both dams depend on the flow of the Paraná River and have limited ability to store water.

River flow is controlled by about 50 dams in Brazil. Those dams have seen water stores decrease since 2019 because of lower rainfall levels.

Weather expert Isaac Hankes says below normal rainfall seems likely for southern Brazil for the rest of the year.

Zarate said the Itaipu dam "totally relies on the improvement of the water flows." He added that if water flow does not improve, the energy crisis will continue into 2022.

Daniela Desantis reported on this story for the Reuters news service. Jonathan Evans adapted this story for Learning English. Susan Shand was the editor.

sustain – v. to give support or relief to

maximum – adj. the highest number or amount that is possible or allowed

inflow - n. a flow or movement of something into a place, organization, etc