Update Required To play the media you will need to either update your browser to a recent version or update your Flash plugin.
By Susan Shand
22 November 2020


Tristan da Cunha is an island in the South Atlantic Ocean with only 245 permanent residents. Those residents have declared a marine protection area three times the size of Britain to help keep safe endangered animals. These include rockhopper penguins, the yellow-nosed albatross and other wildlife.

The island is supervised by the British government. People there call it the most remote inhabited island on Earth. The government said Friday that fishing and other activities will be banned from 627,247 square kilometers of ocean around Tristan da Cunha and the archipelago's three other major islands. The area will be the biggest "no-take zone" in the Atlantic Ocean and the fourth biggest anywhere in the world. 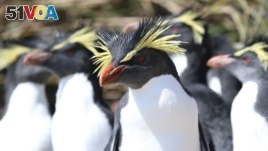 Northern rockhopper penguins on the island of Tristan da Cunha in the South Atlantic. (Andy Schofield/Pew Charitable Trust via AP)

The goal is to protect fish that live in the waters and tens of millions of seabirds that feed on them, the island government said. The remote area is nearly equidistant from South Africa and Argentina.

The Pew Bertarelli Ocean Legacy project, an environmental effort, says the island supports 85 percent of the endangered northern rockhopper penguins, 11 kinds of whales and dolphins and most of the world's fur seals outside of Antarctica.

"Our life on Tristan da Cunha has always been based around our relationship with the sea, and that continues today," James Glass said in a statement. He is the Chief Islander. "That's why we're fully protecting 90 percent of our waters," he added.

The protection zone will become part of Britain's Blue Belt Program. It provides $35.5 million to assist marine conservation in the country's overseas territories. The program has now protected 11.1 million square kilometers of marine areas. British Prime Minister Boris Johnson's office said that is equal to one percent of the world's oceans.

The waters around Tristan da Cunha serve as a feeding ground for the endangered Tristan albatross and yellow-nosed albatross.

The islands are also home to several kinds of land birds that live nowhere else. They include the Wilkins bunting, Britain's rarest bird, and the inaccessible rail, the world's smallest flightless bird, said the Royal Society for the Protection of Birds.

The Pew Bertarelli Ocean Legacy project assists with the creation of marine protected areas around the world. It said it would help Tristan da Cunha protect its waters with technology that uses real-time information to look at ocean conditions and human activity such as fishing. It is a joint project of the Pew Charitable Trusts and the Bertarelli Foundation.

The "decision by the Tristan da Cunha Island Council to protect the archipelago's waters is a great example of local leadership that has a global impact," Dona Bertarelli said in a statement. She is co-chair of the Bertarelli Foundation.

remote– adj. far away from other things

archipelago– n. a group of islands

zone–n. an area that is different or set apart for a special reason

impact–n. a powerful or major influence