Update Required To play the media you will need to either update your browser to a recent version or update your Flash plugin.
By Jill Robbins
14 September 2022


South Korea says a new American tax law discriminates against South Korean electric vehicle (EV) makers. The issue may be a threat to relations between the long-time allies.

The United States Inflation Reduction Act passed last month. It offers tax credits worth as much as $7,500 to buyers of electric vehicles assembled in North America.

Experts say the measure was designed to assist EV manufacturing in North America and block China from supply chains. 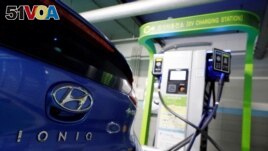 The bill also cancelled tax credits for some electric vehicles made overseas. Among the most affected are the South Korean carmakers Hyundai and Kia. Together, they are in second place for most sales in the U.S. electric vehicle market. Only EV maker Tesla sells more.

In the press, both conservative and liberal opinion writers criticized the policy. Some questioned if the South Korean government should end its part in several U.S.-led economic programs in the country. Some of those projects are considered critical to U.S. efforts in Asia.

South Korean Trade Minister Ahn Duk-geun spoke of the trade dispute at a press conference Tuesday. It should be treated separately from those programs, he said. But, the issue could, he said, "shake the trust in the trade relationship itself."

Keeping good relations with both China and the U.S. is difficult for South Korea. It is home to about 28,000 American troops. It also depends on trade with China more than any other country.

South Korea's conservative president, Yoon Suk Yeol took office in May. He has moved to expand his country's economic and security relationship with the United States.

The United States has agreed to talks with South Korea to reduce the effect of the recent U.S. legislation. But there has still been much criticism in South Korea directed at both Yoon and American President Joe Biden.

So far, the reaction has mainly been limited to published opinion pieces and statements from business and government officials.

Jeongmeen Suh is an economics professor at Seoul's Soongsil University. He says the U.S. policy only affects a limited number of South Korean companies and might not be felt by the average citizen.

So, he thinks it unlikely that South Koreans will hold any major protests over the trade law.

But if not settled quickly, the disagreement could result in diplomatic problems, such as Seoul taking the issue to the World Trade Organization. Some voices have called for South Korea to take a stronger position in line with its growing economic and diplomatic influence.

"If Korea remains passive, it could once again become the victim of the great powers," says a recent opinion writer in Hankyoreh. "Korea needs to get over its ‘small country' mentality and adopt an active posture."

assemble – v. to put something together

posture – n. an official stand or position, as that taken by a nation on a major issue