Update Required To play the media you will need to either update your browser to a recent version or update your Flash plugin.
By Hai Do
02 November 2022


North Korea fired at least 23 missiles into the sea on Wednesday. One of the missiles landed less than 60 kilometers from South Korea's coast.

It was the first time a North Korean missile had landed near South Korea's waters since the two nations were divided in 1945. The number of missiles was also the highest launched by the North in one day.

At least one missile landed outside South Korea's territorial waters, but south of the Northern Limit Line (NLL), a disputed inter-Korean maritime border. 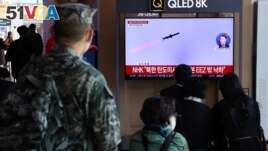 President Yoon Suk Yeol's office called North Korea's action an "act of territorial encroachment." Reporters asked a top presidential official whether the missile was flying towards the South's territory and should have been intercepted. The official answered: "...it did not land in our territory but in the Exclusive Economic Zone under our jurisdiction..." An Exclusive Economic Zone is an area beyond a nation's territorial waters in which that nation still has special rights.

The United States condemned the North's missile launches and called the action "reckless."

"We heard the siren at around 8:55 a.m. and all of us in the building went down to the evacuation place in the basement," an Ulleung county official told Reuters.

Nuclear-armed North Korea has tested a record number of missiles this year. Officials from South Korea and the U.S. said the North has completed technical work to test a nuclear weapon for the first time since 2017.

North Korea continues to test long-distance, or ballistic, missiles. It has done so although several United Nations Security Council resolutions ban all ballistic and nuclear tests by the country.

The North's missile tests on Wednesday came after a weekend tragedy in which more than 150 people were killed in a crowd surge that took place at a Halloween celebration. It was South Korea's largest disaster in years.

The launches Wednesday started hours after North Korea demanded that the U.S. and South Korea stop the military exercises that started on Monday.

Called Vigilant Storm, the exercises involve 240 warplanes flying 24 hours a day. The exercises, which began October 31, are to continue through November 4 and include training both in the air and on the ground.

Earlier on Tuesday, a U.S. State Department spokesman said that the exercises were purely defensive and not hostile toward the North.

But a member of the Central Committee of North Korea's ruling Workers' Party denounced the exercises. The member said that the number of warplanes involved in Vigilant Storm proved the exercise was "aggressive and provocative" and targeted North Korea. He said even its name is similar to the U.S.-led Operation Desert Storm against Iraq in the 1990s.

South Korean officials said that because of the North's missile launches, some air paths over the sea between North Korea and Japan would be closed until Thursday.

Cheong Seong-Chang is an expert at the private Sejong Institute in South Korea. Cheong said the danger of armed clashes between the Koreas off their western or eastern coasts is increasing. He said South Korea needs to make "proportional responses" to North Korean actions, not "overwhelming responses." He added tensions could get out of control and possibly lead the North to use its nuclear weapons.

Hai Do adapted this report for VOA Learning English from Associated Press and Reuters reports.

encroachment –n. the action of slowly moving into an area beyond a usual limit

intercept –v. to meet or stop something before it gets to where it aims to go

evacuation –n. the process of moving people from an area or leaving an area because of the threat of danger

provocative –adj. meant to cause a reaction

proportional –adj. having a size or amount that is matched to another and not greater or smaller

overwhelming –adj. great in number and more than necessary