Update Required To play the media you will need to either update your browser to a recent version or update your Flash plugin.
By Mario Ritter
02 January, 2018


South Korea has offered to hold high-level talks with North Korea over the North possibly taking part in the Winter Olympic Games next month.

Unification Minister Cho Myoung-gyon said Tuesday that South Korean officials want to meet North Korean diplomats in one week. He said the two sides could meet at Panmunjom, a village in the demilitarized zone separating the Koreas.

The meeting would be the first high-level talks between the sides since December 2015. 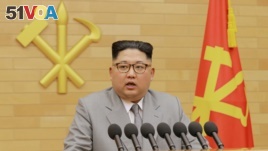 The South Korean offer came one day after North Korea leader Kim Jong Un gave his New Year's Day message. In it, Kim announced that he is considering sending a team to take part at the winter games, in Pyeongchang, South Korea.

Late Monday, South Korean President Moon Jae-in welcomed the North Korean offer. However, he added that any improvements in relations between North and South Korea could take place only with the North ending its nuclear weapons program.

Grant Newsham is a researcher at the Japan Forum for Strategic Studies in Tokyo. He told VOA that the Moon administration considers restarting talks a possibility. He said the effort represents the desire by some South Koreans to "somehow reach a deal" with North Korea.

China's government is an ally of North Korea. It said it supported talks between the two sides. A foreign ministry spokesman said it was a good development that could ease tensions and support the removal of nuclear weapons from the Korean Peninsula.

In his speech, Kim Jong Un warned the United States that North Korea's nuclear program is a reality. He said that he has the ability to use nuclear weapons if attacked.

U.S. President Donald Trump commented on the situation on the social media network Twitter. He said strong restrictions on North Korea and other forms of pressure are working.

Of the offer of talks, Trump said, "Perhaps that is good news, perhaps not – we will see!"

demilitarized zone – n. an area where soldiers and weapons are banned

fault – n. responsibility for a bad situation or mistake