Update Required To play the media you will need to either update your browser to a recent version or update your Flash plugin.
By Ashley Thompson
10 February 2020


South Koreans are celebrating after movie director Bong Joon Ho and his film Parasite won big at the Academy Awards in Los Angeles. 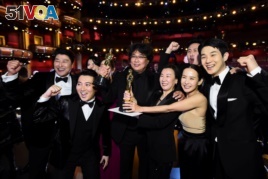 President Moon Jae-in and his advisors began a meeting by clapping their hands in celebration. Moon later wrote on Twitter that he is proud of Bong and others involved in the film. The South Korean leader said he was "grateful to them for giving courage and pride to our people who are overcoming difficulties."

At Yonsei University in Seoul, the university Bong attended, students belonging to a school movie club watched the awards show together.

Student Kim Nam-hoon told The Associated Press, "It's deeply meaningful for Korean movies and this will open the path for further development. It's such a great honor. I'm speechless."

Another student, Jeong Ho-cheol, praised Bong for pleasing both movie critics and crowds. He said, "His way of dealing with the underside of Korean society and problems such as rich-poor gaps and the way he expresses those issues are very expressive."

Parasite is a dark comedy about a poor South Korean family that makes up false job experiences so they can work for a wealthier family. The wealthy family gives them positions as tutors, housekeepers and personal drivers.

Kim Kyung-hyun is a professor of visual studies at the University of California, Irvine. He told VOA, "Parasite tells a universal story in a way that has made it obviously very successful worldwide."

He added, "The film touches on South Korea's over-education syndrome, but also deals with things like climate change and economic inequality."

It is unclear what is next for Bong or the rest of the film's cast of actors. But Parasite's success at the Oscars is likely to increase interest in South Korea's movie industry.

In addition to winning four Academy Awards, the film has won about 180 awards so far, including the highest honor at the Cannes Film Festival.

Kim Kyung-min told VOA, "I think people around the world will evaluate and treat Korean movies with more respect after seeing what a great reputation Parasite has." The 33-year-old South Korean added, "I am proud of what [the director and cast] did, and I am looking forward to seeing more Korean directors succeed."

Ashley Thompson adapted this article based on reports by VOA News and The Associated Press. George Grow was the editor.

Have you seen Parasite? What did you think of it and other films nominated for Best Picture? Let us know in the comments section.

clap - v. to hit the palms of your hands together usually more than once

proud - adj. very happy and pleased because of something you have done, something you own, someone you know or are related to, etc.

courage - n. the ability to do something that you know is difficult or dangerous

tutor - n. a teacher who works with one student

syndrome - n. a disease or disorder that involves a particular group of signs and symptoms

evaluate - v. to judge the value or condition of (someone or something) in a careful and thoughtful way