Update Required To play the media you will need to either update your browser to a recent version or update your Flash plugin.
By Dan Novak
31 October 2022


India and South Korea are mourning and searching for answers after weekend disasters that left hundreds of people killed.

Saturday, more than 150 people were crushed to death at a crowded Halloween celebration in Seoul. The next day, a bridge collapse in India killed at least 133 people.

The South Korean disaster took place in the narrow roads of Seoul's Itaewon neighborhood. The area has many places for drinking, dancing and other nightlife. 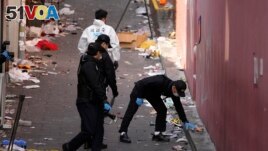 Tens of thousands of people flooded into Itaewon Saturday. Witnesses and survivors remembered a "hell-like" chaos when the crowd surged and people began to fall as they tried to escape. The witnesses said the entire Itaewon area was very crowded with vehicles and people. This made it very difficult for rescuers to get to those in need.

Police said they have created a 475-member group to investigate the crush.

Officers have received videos taken by security cameras in the area and are looking at video clips posted on social media. The police told reporters that officers have interviewed more than 40 witnesses so far.

Other police officers said they are trying to find exactly when and where the crowd surge started and how it got worse. They said a team of police officers searched the Itaewon area on Monday.

"The government will thoroughly investigate the cause of the incident and do its best to make necessary improvements of systems to prevent a similar accident," South Korean Prime Minister Han Duck-soo said at a government meeting about the disaster.

Some witnesses said the surge was caused by people in the upper part of the road pushing others farther down the hill.

As of Monday morning, the government said it had identified 153 of the 154 dead. It said 149 other people are injured, 33 of them seriously.

The bridge that collapsed Sunday in the Indian town of Morbi, Gujarat state, was 143 years old. Officials are still searching for possible victims. Police said Monday they had arrested nine people in connection with the event.

The bridge was built by the British in the late 1800s and was called an "engineering marvel." It had been closed for repair work for several months earlier this year. It reopened four days before the collapse.

"We won't let the guilty get away, we won't spare anyone," Yadav said.

The company had reopened the bridge, which crosses a wide part of the Machchhu river, on October 26. That is the first day of the Gujarati New Year, which falls during the Hindu festival season. The newly reopened bridge drew hundreds of people.

A Morbi city official, told the Indian Express newspaper the company had reopened the bridge without first getting a "fitness certificate." That claim could not be independently confirmed.

Officials said the structure collapsed under the weight of hundreds of people. Security camera videos showed the bridge shaking violently and people trying to hold on to its cables. Then the walkway gave way and crashed into the river.

State minister Harsh Sanghvi told reporters that 133 people were confirmed dead and many others were admitted to hospitals in serious condition. Rescue teams worked overnight to search for survivors.

It was not clear exactly how many people were on the bridge when it collapsed. But survivors said it was so crowded that people were unable to quickly move to safety when its cables began to break.

A Gujarat state government election is expected in coming months. Opposition parties have demanded an investigation into the collapse.

In Indonesia, 132 people were killed after police fired tear gas at a crowd during a soccer match October 1. It caused a surge as people tried to flee.

surge — n. a sudden movement of many people

alley — n. a narrow street or passage between buildings

marvel — n. a wonderful or marvelous person or thing

festival — n. a special time or event when people gather to celebrate something

certificate — n. a document that is official proof that something has happened

cable — n. a thick, strong rope made of wires that are twisted together