Update Required To play the media you will need to either update your browser to a recent version or update your Flash plugin.
By Bryan Lynn
21 October 2021


South Korea has launched its first space rocket to be completely developed and built in the country. But the rocket failed to successfully deploy a test satellite into orbit after its launch Thursday.

South Korean television showed a live broadcast of the launch. The 47-meter rocket lifted off with bright yellow fire shooting from its engines.

The rocket is called Nuri. It launched from the country's Naro Space Center, which is on a small island off South Korea's southern coast.

President Moon Jae-in watched from the space center. He said the rocket completed all its flight stages just as it was supposed to. "All this was done based on technology that is completely ours," he said.

But Moon added that the rocket then failed to place the test satellite into orbit. "Unfortunately, we did not fully reach our goal."

Moon praised the workers and said although the mission was incomplete, the project would press ahead. "It's not long before we'll be able to launch it exactly into the target trajectory." Moon said the launch demonstrated the country's progress and promised that the "Korea Space Age" was coming.

Nuri is the country's first space launch vehicle developed and built completely with South Korean technology. The three-stage rocket is powered by five rocket engines to complete its first and second stages. Another engine is used during the rocket's final stage.

The rocket is designed to carry a payload of up to 1.5 tons to an orbit 600 to 800 kilometers above Earth. 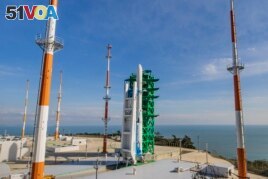 Science minister Lim Hye-sook told reporters the mission failed because the third-stage engine stopped burning about 50 seconds earlier than expected. This prevented the payload from reaching the right speed to reach orbit.

Officials from the country's space agency, the Korea Aerospace Research Institute, said debris from the test payload was expected to land in waters south of Australia. The agency said it was planning to form an inspection committee soon to study what went wrong and to make plans for the next test launch. Another attempt is planned for May.

After depending on other countries to launch its satellites since the early 1990s, South Korea is now trying to become the 10th nation to send a satellite into space with its own technology.

Officials say this ability would be important for the country's future space projects. South Korea plans to launch communications satellites as well as its own military intelligence satellites. The country is also hoping to send an explorer to the moon by 2030.

South Korea launched another space launch vehicle from the Naro spaceport in 2013. That vehicle, named Naro, was a two-stage rocket built mainly with Russian technology.

Naro's launch came after years of delays and a series of failures. The rocket reached the desired altitude during its first test in 2009. But it failed to release a satellite into orbit. Then, during a second test in 2010, Naro exploded shortly after takeoff.

stage – n. a particular time within a process

trajectory – n. the curved line that something follows as it moves through the air

payload – n. the amount of goods that a vehicle can carry

debris – n. broken or torn pieces that come from something larger