Update Required To play the media you will need to either update your browser to a recent version or update your Flash plugin.
By Alice Bryant
02 September 2021


South Korea lawmakers approved a law on Tuesday banning app stores from controlling how apps and their services are paid for.

South Korea is reportedly the first country in the world to pass such a law. 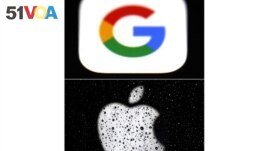 FILE - This combo of photos shows the logo for Google, top and Apple, bottom. South Korea's National Assembly approved legislation on Tuesday, Aug. 31, 2021, that bans app store operators such as Google and Apple from forcing developers to use their in-ap payment systems. (AP)

Google and Apple have faced a lot of criticism for their requirements on payment systems. That is because they get up to 30 percent of the money from the sales in their app stores. They say that the money helps pay for the cost of operating these stores. Google's Google Play and Apple's App Store are used by people around the world.

The new South Korean law prevents app stores from using their strong market positions to require use of their payment systems. Instead, they must let app makers give the public additional ways to pay. South Korea says the ban is aimed at supporting fairer competition.

Apple criticized the law in a statement Tuesday. It said the law will "put users who purchase digital goods" with other payment methods at risk of fraud. The company also said the law would weaken users' privacy protections and make it hard to oversee their purchases. And, Apple said, it will make parental controls and other tools less effective.

The company said user trust in app store purchases will decrease and lead to fewer opportunities for Korean app developers.

Officials in Europe, China and other places worry about the market control of Apple, Google and similar companies. That includes their control over payment systems, online advertisements and other things. Chinese officials have fined some companies for breaking rules meant to prevent monopolies. Other governments are trying to decide how best to keep markets competitive.

The Korea Internet Corporations Association is an industry group. Its members include South Korea's largest internet companies, such as Naver, a search engine and online shopping service. Naver welcomed the passage of the law and said it would create healthier competition. The company also said it would give users more choices at lower prices.

Google said it is considering how to obey the new law.

"Google Play provides far more than payment processing," and the service cost helps keep Android free, the company said in a statement. Android is Google's operating system for smart phones. The company said it gives developers the tools to reach a market of billions of people around the world.

That decision was part of a legal case involving iPhone app developers in the U.S. Also, a U.S. federal court judge will soon rule on a separate case brought by Epic Games. The company created the popular video game Fortnite.

The judge wondered why Apple would not let developers of apps like Fortnite show different payment choices within their apps.

Over the last year, Google and Apple reduced the percentage of sales they take from app makers from 30 percent to 15 percent. That reduction is for app makers that earn less than $1 million a year, which is the case for most apps in their stores. But that does not help the largest app makers, like Epic Games and Spotify. The two have taken their complaints around the world.

The European Union's executive Commission has accused Apple of forcing developers to use its payment system. Several U.S. states brought a legal case in July against Google's app store. And Australian officials have also said they are concerned about Apple and Google's requirements related to payment methods.

app (application) –n. . a computer program made for smart phones and tablets that carries out a specific job

monopoly –n. a situation in which a company has complete control of the supply of goods or service in an area or market

retaliation –n. to do something bad to someone who has hurt you or treated you badly

fraud –n. the crime of using dishonest methods to take something valuable from another person

opportunity –n. an amount of time or a situation in which something can be done or gained; a chance to do business

subscription –n. an agreement that you make with a company to get a publication or service regularly