Update Required To play the media you will need to either update your browser to a recent version or update your Flash plugin.
By Hai Do
13 November, 2017


North Korean soldiers shot at and wounded another soldier who was crossing the border between the North and South.

The South Korean military said Monday the soldier was trying to defect in the Joint Security Area of the Demilitarized Zone, or DMZ. 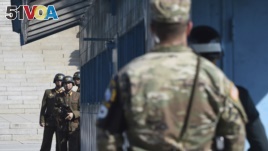 The North Korean soldier left from a guard post at the northern side of Panmunjom village to the southern side of the village. He was shot in the shoulder and elbow and was taken to a South Korean hospital, said the South's Defense Ministry.

It was not immediately known how serious his injuries were or why he decided to defect.

The defection came at a time of heightened tension over North Korea's nuclear weapons program. North Korea has normally accused South Korea of enticing its citizens to defect, something the South denies.

Panmunjom and other DMZ areas are guarded by hundreds of thousands of troops from North Korea and the United Nations Command. The command includes troops from the United States and South Korea.

It is estimated that about 30,000 North Koreans have defected to South Korea since the end of the Korean War in 1953. But most of them travel through China.

In 1998, a North Korean soldier fled to the South through the DMZ, but there have been few incidents in recent years.

Hai Do adapted this story for Learning English based on AP news reports. Mario Ritter was the editor.

defect –v. to leave a group or country and go to another one that is a competitor or enemy