Update Required To play the media you will need to either update your browser to a recent version or update your Flash plugin.
By Alice Bryant
29 December, 2017

Historians say tens of thousands of women from around Asia -- many of them Korean -- were sent to military brothels to provide sex to Japanese soldiers during the war.

In his statement, Moon promised to take measures to meet the victims' demands. This may put the future of the deal in question, two years after both countries called it "final and irreversible."

Moon's statement came one day after a state-appointed team found that Seoul's government at the time did not communicate well with the victims before reaching the deal.

The team also said parts of the deal were not made public. That includes Japan's demand that the South Korean government avoid using the term "sexual slavery." Japan also wants South Korea to provide a plan to remove a statue representing the sex slaves. The statue sits in front of the Japanese embassy in Seoul. 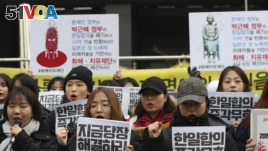 South Korean students shout slogans during a press conference about the 2015 agreement between South Korea and Japan near the Japanese Embassy in Seoul, South Korea, Thursday, Dec. 28, 2017.

South Korea agreed to officially describe the victims as "victims of Japanese military comfort stations," but did not make any clear promise about the statue, the team said.

"It has been confirmed that the 2015 comfort women negotiation between South Korea had serious flaws, both in process and content," Moon said in a statement read by his representative.

Even though the past deal was an official promise between the two governments, he is declaring that the deal does not resolve issues over the comfort women.

His comments suggest that Seoul may seek a new negotiation of the deal. This would anger the Japanese government. Moon also said that issues over history shouldn't affect efforts to build relations between the countries today or in the future.

Some experts say Moon's government is not likely to launch a diplomatic dispute with Japan by throwing out the deal. They say this is especially true at a time when the two countries must display unity against North Korea's growing nuclear threat.

Japanese Foreign Minister Taro Kono said on Wednesday that Japan stands by the deal. He said any attempt to change it would make relations between the countries "unmanageable" and "unacceptable."

When asked whether Moon's statement means a renegotiation may be needed, Seoul's Foreign Ministry representative Noh Kyu-duk did not give a clear answer. He said only that his government will seek "sincere and practical" measures quickly to again bring honor to the victims.

Under the deal, Japan agreed to provide 1 billion yen, or $8.8 million in payments to the surviving victims. South Korea said it would try to resolve Japan's complaint about the statue in front of the embassy.

The deal received sharp criticism in South Korea, where many thought the government settled for too little. Japan has been angry that South Korea hasn't taken steps to remove the statue and similar monuments in other parts of the country. It said the countries had a clear understanding on the matter.

The deal was negotiated under former president Park Geun-hye, who was removed from office and arrested in March on charges of corruption. Moon promised to redo the deal during his presidential campaign. But he has avoided specific details about renegotiations since taking office in May.

South Korea's Foreign Ministry said government officials will hold discussions with victims and experts before deciding whether to try to revise the deal.

brothel – n. a building in which prostitutes are available

irreversible - adj. impossible to change back to a previous condition or state

comfort - n. a state or feeling of being less worried, upset, frightened, etc., during a time of trouble or emotional pain

unmanageable - adj. difficult to deal with or control

practical - adj. logical and reasonable in a particular situation

monument – n. a building or statue that honors a person or event