Update Required To play the media you will need to either update your browser to a recent version or update your Flash plugin.
By Mario Ritter
01 November, 2017

The president made the statement in a speech Wednesday to South Korea's National Assembly.

Moon added that both South Korea and North Korea should observe a joint declaration from 1992. In that statement, both countries said the Korean Peninsula should be free of nuclear weapons. 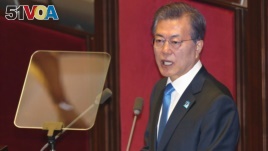 Observers noted that Moon's position on such weapons remains unchanged.

The president's statement comes as opposition lawmakers have called for a redeployment of American tactical nuclear weapons in the South. They want to defend against the threat of North Korean efforts to develop nuclear weapons.

Some South Korean lawmakers say their country should have its own nuclear weapons.

On September 3, North Korea tested its sixth and most powerful nuclear device yet.

North Korea's nuclear and long-distance missile tests have led to strong language from United States President Donald Trump. He has threatened to launch military action against the North if it continues testing barred by the United Nations Security Council.

However, in his speech on Wednesday, Moon stated that no military action will be taken on the Korean Peninsula without the permission of South Korea. He also said that his country would control its own future.

South Korea will be the second country that Trump visits on his trip to Asia later this month. North Korea's nuclear and long-range missile development is expected to be one of many issues to be discussed.

After his visit to South Korea, Trump will then travel to Beijing for talks with Chinese officials.

As preparations for the visit continue, members of his cabinet have visited Asia and discussed the situation in Korea.

Last month, U.S. Defense Secretary Jim Mattis said, "Our goal is not war, but rather the complete, verifiable and irreversible denuclearization of the Korean Peninsula."

The Reuters news agency reports that the United States is carrying out direct, secret negotiations with North Korea.

The report was published on Wednesday. The story said that an unidentified State Department official told Reuters that the U.S. special diplomat for North Korea has been speaking with North Korea's U.N. mission.

The U.S. does not have diplomatic relations with North Korea. But, special diplomat Joseph Yun, the report says, has been in contact with the North through what is known as the "New York channel." That term suggests North Korea's diplomatic contacts with the U.N.

The unidentified official said the discussion "has not been limited at all, both (in) frequency and substance."

Secretary of State Rex Tillerson said last month that the United States is extending diplomatic efforts toward North Korea. President Trump, however, has voiced anger over nuclear and long-range missile tests carried out by the North.

Richard Green and Steve Herman reported this story for VOA News. Mario Ritter wrote a story based on their reports for VOA Learning English. His story includes information from Reuters. George Grow was the editor.

tactical – adj. something specific that works toward a large plan or goal

verifiable – adj. something that can be shown to be true

mission – n. a group of people who are sent to a foreign country for specific reason or purpose

frequency – n. how often something happens