Update Required To play the media you will need to either update your browser to a recent version or update your Flash plugin.
By Mario Ritter
10 May, 2017


Moon Jae-in was sworn in as South Korea's president Wednesday.

He took office just one day after the presidential election because South Korea has had an acting president since last December. That was when lawmakers voted to impeach President Park Geun-hye.

Moon spoke during his inauguration ceremony at the National Assembly building in Seoul. He promised the Korean people he would lead by example. 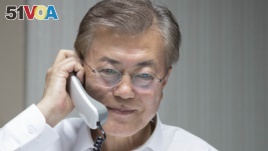 The United States said in a statement that it looks forward to "deepen the enduring friendship and partnership between our two countries."

Chinese President Xi Jinping offered his congratulations to the new South Korean leader. He also said that China wanted to deal with disputes "appropriately" on the basis of trust and understanding.

In his inauguration speech, Moon promised political reforms to put checks and balances on the power of the presidency. He also said he would increase government spending on education and jobs, while increasing taxes on the wealthy.

The new president said he would increase efforts to ease tensions on the Korean Peninsula. He opened the possibility of visiting Pyongyang, the North Korean capital.

"If needed I will fly directly to Washington. I will go to Beijing and Tokyo. And if conditions are met, I will go to Pyongyang. In order to bring about peace and security on the Korean Peninsula, I will do everything I can," he said.

The new president wants to increase contacts with North Korea, while continuing to pressure its government.

U.S. President Trump has wanted to increase pressure on the North by pushing for a tightening of sanctions. In addition, the U.S. armed forces recently carried out joint exercises with South Korea's military.

However, Moon said recently that the decision to deploy the THAAD missile defense system to South Korea should have been made after the presidential election. The deployment has been met with protests in South Korea.

The deployment has increased tensions between South Korea and China. China opposes the antimissile system and having its powerful radar so close to the country's border. It has cut back on Chinese traveling to South Korea and some imports to show its displeasure.

Moon, however, continues to place importance on the U.S. alliance with South Korea. He says the two countries want the same thing: to bring North Korea back to negotiations to peacefully solve the nuclear issue.

Some experts question if a policy of both engagement and pressure can be carried out successfully.

Katherine Moon is a Korea expert with the Center for East Asia Policy Studies at the Brookings Institution in Washington, D.C. She said a policy of engagement might help North Korea, but hurt efforts by the U.S. and allies in East Asia.

Speaking to VOA on Skype she said there were limits to the use of methods of engagement, which she termed the "good cop" approach and those of pressure, a "bad cop" approach.

"It doesn't hurt to have a good cop, bad cop when you're dealing with a very tough opponent, which North Korea is. But we are not in an ideal world situation in politics, and definitely the times right now don't call for that much of a good cop, frankly."

Moon Jae-in was the presidential candidate of South Korea's Democratic Party. He won the election with 41 percent of the vote.

He takes office at a time when the country is struggling with the arrest of Park Geun-hye and tensions with North Korea over its nuclear and missile programs. South Koreans also are concerned about the economy, job growth, trade ties and opportunities for young people.

inauguration – n. the ceremony starting the term of a president or other high official

facilities – n. structures such as buildings and heavy equipment

engagement – n. the process of being involved in something

sanction – n. an action that is taken or an order that is given to force a country to obey international laws by limiting or stopping trade with that country, by not allowing economic aid for that country, etc.

opportunity – n. a good chance for progress or forward movement