Update Required To play the media you will need to either update your browser to a recent version or update your Flash plugin.
By Jill Robbins
18 November 2021


More than half a million South Koreans sat for the annual national college entrance examinations on Thursday.

Rules meant to stop the spread of the coronavirus added pressure to the eight-hour event. In Asia's fourth-largest economy, the test has an important effect on a person's life. Success on the test may lead to getting one of a limited number of jobs in a competitive society.

The yearly examination, called "Suneung," or the College Scholastic Ability Test, is important in a country concerned with education. Jobs, social standing and even marriage possibilities can depend on which university a person attends.

This year's test-takers did not face the delays and problems that student faced during last year's exams. But COVID-19 measures have changed how students take the test. 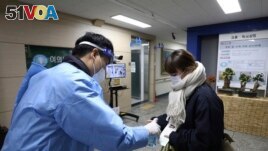 A teacher gives a hand sanitizer to a South Korean student before the College Scholastic Ability Test at a high school in Seoul Thursday, Nov. 18, 2021

Students had their temperatures taken before entering classrooms, and those with high temperatures had to go to separate testing areas. The Education Ministry said that at least 173 people who appeared to have the coronavirus or who had to be separated from others will take the test at hospitals or separate exam centers.

"I couldn't go to private institutes, study rooms, nor school properly due to coronavirus," said 17-year-old Ahn Jeong-min. "Still, I'm vaccinated, and everyone will wear face masks and use partitions during the exam, so I think I can take the exam well, feeling comfortable rather than much concern."

The education ministry reports that more than 509,000 students in their final year of high school, graduates and others have signed up to take the exam. The big test is held at 1,251 places nationwide.

Thursday morning saw traditional efforts made by all of society to help the test-takers. The country's financial markets opened an hour later than usual to ease traffic. Air traffic, both military and commercial, was grounded for part of the day.

"We're doing our part to keep distractions down so you can keep your scores up!" tweeted U.S. Forces-Korea.

Pandemic measures meant louder traditions to express good wishes to the test-takers were missing. Outside schools in Seoul, there was none of the usual cheering by high school students, praying parents or friends who usually beat drums and hand out sweets.

Thursday, South Korea reported its biggest daily jump in coronavirus infections since the start of the pandemic. There are growing concerns about a more infectious version of the virus called the Delta variant.

The 3,292 new cases reported by the Korea Disease Control and Prevention Agency on Thursday marked the second straight day with over 3,000 cases. The agency said 29 patients died in the past 24 hours. That means a total of 3,187 people have died since the beginning of the pandemic last year while 506 others were in serious condition.

South Korean schools have been using a mixture of online and in-person classes.

Seo Kwang-sun is a mother of a test-taker in Seoul. She said, "(Students) weren't given proper classes (because of COVID-19) and I often saw my child worrying much and struggling."

Return to classrooms is planned

The Education Ministry had planned a full return to classrooms starting next week. The aim is to help reduce missed education time and to support the government's virus planning.

Officials eased social distancing rules starting this month. The move was the first step toward returning to normal. The new rules permit larger social gatherings and longer indoor eating hours at restaurants. Officials noted concerns about the pandemic's effects on the economy. They expressed hope that improving vaccination rates would keep hospitalizations and deaths down even if the virus continues to spread.

But there has been a rise in serious cases and deaths among older people who rejected vaccines or who have less resistance to the virus. Some are asking whether the decision to loosen virus restrictions comes too soon.

Lee Eu-gene, a mother who said she had an older child take the test last year, said her son sitting for the exam this year seemed to be better off because schools had more in-person learning.

"He studied in this situation, so it's in the mother's heart that I hope he will get good results and happily expand his future," she said.

Kim Tong-Hyung reported on this story for the Associated Press and Yeni Seo and Daewoung Kim reported on it for Reuters. Jill Robbins adapted it for Learning English. Mario Ritter, Jr. was the editor.

due to –prep. because of something; thanks to something

partition – n. a wall or screen that separates one area from another

distraction –n. something that makes it difficult to think or pay attention

What do you think of the college entrance exam in South Korea? How is it the same or different from exams where you live? We want to hear from you. Write to us in the Comments Section.