Update Required To play the media you will need to either update your browser to a recent version or update your Flash plugin.
By Bryan Lynn
02 December, 2018


Most people would do anything to get out of jail. Some prisoners risk their lives in attempts to escape and regain their freedom.

But some South Koreans actually pay money to spend time in a mock jail to escape the pressures of daily life.

The detention center, called "Prison Inside Me," opened in the South Korean city of Hongcheon in 2013. Since then, more than 2,000 people have put themselves through the prison-like experience.

Many of them are tired, overworked office workers or students. Some say the complete isolation of a jail environment can help them break free from day-to-day pressures.

The building looks like a real prison. Inside, individuals are kept alone in small "cells." There is no bed in the room, so many sleep on the floor on a yoga mat.

These "prisoners" receive only a blue uniform to wear, a tea set, as well as a pen and paper for keeping notes. Prison rules are strongly enforced. Electronic devices, clocks and other personal belongings are banned. Talking among the prisoners is not permitted.

Food served is simple. It includes rice porridge in the morning, and steamed sweet potato and a banana drink for dinner. 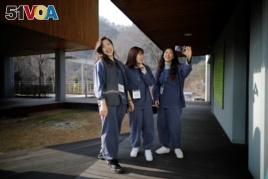 Park Hye-ri (L), 28, a startup business program manager, takes a selfie with her friends before being locked up at Prison Inside Me, a mock prison facility, in Hongcheon, South Korea, November 10, 2018. (REUTERS/Kim Hong-Ji)

Park Hye-ri is a 28-year-old office worker. She paid $90 to spend 24 hours at the Prison Inside Me. She says the experience gave her a "sense of freedom" that she really needed.

"I was too busy," Park told the Reuters news agency as she sat in her 55 square meter cell. "I shouldn't be here right now, given the work I need to do. But I decided to pause and look back at myself for a better life."

Noh Ji-Hyang is one of the founders of the mock prison. She told Reuters she got the idea from her husband, a government lawyer who often put in 100-hour work weeks. She said her husband once told her he would like to take a break from work and go into "solitary confinement" for a week to "rest and feel better."

Noh said that some people are not sure what to expect when they first arrive to take part in the unusual prison experience. "But after their stay, they say this isn't a prison. The real prison is (the life) they return to," she said.

South Korea is known for its demanding work culture and schooling. The suicide rate is two times as high as the United States, and one of the highest in the world.

An international study showed that on average, South Koreans worked 2,024 hours in 2017. This was the third longest after Mexico and Costa Rica, the Organization for Economic Cooperation and Development reported.

Experts say a downturn in recent years in South Korea's export-driven economy has made employment and school competition more intense. This could lead even more people to temporarily escape real life in a prison-like environment.

The Reuters news agency reported on this story. Bryan Lynn adapted the report for VOA Learning English. George Grow was the editor.

mock – adj. not real but appearing or pretending to be exactly like something

isolation – n. the state of being separate from other people, places, or things

cell – n. small room in a prison or police station where a prisoner is kept

solitary confinement – n. punishment in which a prisoner is kept in a room alone