Update Required To play the media you will need to either update your browser to a recent version or update your Flash plugin.
By Dan Friedell
14 July, 2016


Tens of thousands of people are fleeing South Sudan after five days of fighting in Juba, the capital city.

Many people are heading south towards Uganda, but the trip is considered extremely dangerous.

The South Sudanese are fleeing fighting between forces loyal to President Salva Kiir and those who support First Vice President Riek Machar.

Some of the people who have made it across the border are talking about their experiences.

One young woman says she barely escaped before a bomb hit her home. Two of her relatives died. She hid for a while in the northern part of Juba before finding a bus and heading south. 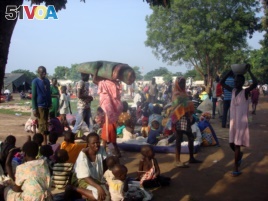 At military checkpoints, men in government uniforms asked for money and other bribes before letting the bus continue south. People gave away cell phones, laptop computers and even clothing.

Edwin Taylor of Liberia made it through South Sudan as well.

He and his brother made the journey safely, but said others were not so lucky.

"You will see bodies on the road which are foreigner bodies, cars on the road. People who were coming from the capital...They killed these people, took their cars, robbed them. It's not easy. It was by the grace of God we maneuvered to come here," Taylor said.

One Ugandan woman made it home from South Sudan. She said government soldiers were preventing South Sudanese from leaving the country.

The United Nations says at least 272 people have been killed during recent fighting in South Sudan. At least 36,000 residents of South Sudan are displaced. Many are staying at United Nations bases and churches in Juba.

Armed bodyguards loyal to Machar arrived at the presidential palace in 21 vehicles. A dispute started and one guard was killed.

A spokesman for the South Sudan army said he does not know of new checkpoints or more violence on the road to Uganda.

But police in Uganda say more people are arriving in Uganda with gunshot wounds.

Ugandan authorities say they are preparing for more refugees. They are also placing armed vehicles along the border to make sure fighting does not spread into Uganda.

Lizabeth Paulat wrote this story for VOANews. Dan Friedell adapted it for Learning English. Mario Ritter was the editor.

What do you think of the dangerous journey these people took to Uganda? We want to know. Write to us in the Comments Section or on 51VOA.COM.

checkpoint – n. a place where people, cars, etc., are searched by someone (such as a police officer) before being allowed to continue