Since the middle of July, more than 16,000 South Sudanese have fled to the U.N. center in Malakal. They are fleeing the conflict in South Sudan and looking for protection and help. Over 10,000 have arrived at the camp just this month.

Joel Millman works for the International Organization for Migration. He says the increasing number of new arrivals is creating an extremely difficult situation.

Mr. Millman notes that the camp was designed for 18,000 people; currently, more than 46,000 people are living there. As a result, he says, the tents are too crowded, and the drinking water is becoming dirty. 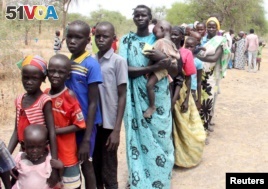 Residents flee fighting in the Upper Nile capital of Malakal on May 2, 2015. (REUTERS/Denis Dumo)

He thinks the problems are only going to get worse. About 1,000 more people are coming every day. Soon, the rains will come, too.

"The more we build, the faster people come for shelter. We can't separate families. We can't turn them away. On the other hand, we cannot expose them to what could be extremely dangerous health conditions."

Aid agencies do know a solution to the problems. The agencies say they must be able to provide aid directly to the people who live near Malakal. But fighting there has prevented aid workers from reaching those in need.