The government of South Sudan has told its soldiers to stop fighting government opponents. The move is part of an effort to end violence that began after a dispute between the country's president and former vice-president.

The government's announcement came after leaders of other countries in the area met to urge the two sides to stop the violence. A spokesman for South Sudan's Foreign Ministry told VOA on Friday that the government's cease-fire will begin immediately. It gave the government's opponents three days to answer the call for a cease-fire.

Violence began in the capital Juba on December 15th and quickly spread across the country after a dispute between President Salva Kiir and former vice president Riek Machar -- his main political competitor. In July, Mr. Kiir dismissed his cabinet, including Mr. Machar. Tensions had been rising since then, but fighting began only when Mr. Kiir accused Mr. Machar of planning to overthrow the government. Mr. Machar denied the claim.

The fighting surprised many observers. From the time South Sudan became an independent country in 2011, many feared that the new country would be at war with Sudan, the country from which it won independence. Instead, South Sudan is at war with itself.

The fighting has divided the military in some areas, and has increased ethnic tensions. Some members of President Kiir’s Dinka ethnic group have been fighting with Mr. Machar’s ethnic group -- the Nuer.

The foreign ministry said government soldiers have taken control of Malakal -- the capital of Upper Nile state -- after days of fierce battles.

Leaders of East African countries meeting in Nairobi on Friday welcomed the South Sudanese government’s decision to end the fighting. They called on Mr. Machar and others to do the same. In this photo released by the Kenyan Presidential Press Service, Kenyan President Uhuru Kenyatta, left, speaks during the meeting on the situation in South Sudan, held at State House, Nairobi, Kenya, Friday, Dec. 27, 2013. On the right is Ethiopian Prime Minister Hailemariam Dessalegn (AP Photo/Kenyan Presidential Press Service)
Both Mr. Machar and Mr. Kiir have agreed to meet. But the government has rejected Mr. Machar's demands that the government release his supporters, who were jailed in the early days of the crisis.

At the meeting in Nairobi, Kenyan President Uhuru Kenyatta said the detained political leaders should be included in talks to end the crisis.

"The detainees are part of South Sudan's leadership and as such are part of the solution. South Sudan's legal system must process them as it should while they are treated humanely and quickly enabled to be an integral part of the dialogue that will solve the underlying political problems that have brought us to this unfortunate crisis."

Mr. Kenyatta also urged the African Union, the United Nations and other countries to promise more support for South Sudan. And he said leaders of other East African nations would not accept what he called the "unconstitutional overthrow" of South Sudan's democratically-elected government.

"It should be underscored that the legitimate government of South Sudan under President Salva Kiir Mayardit is the duly elected representative of the people of South Sudan and it has every responsibility to restore peace and stability throughout the country." 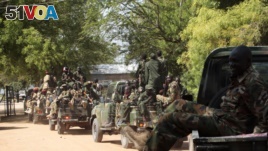 South Sudan army soldiers hold their weapons as they ride on a truck in Bor, Dec. 25, 2013.
The United Nations estimates more than 1,000 people have been killed in violence across the country since the middle of December. It says more than 50,000 people have fled to UN bases. The UN hopes to send more peacekeepers to the country within a few days. UN Secretary-General Ban Ki-moon has said the crisis cannot be ended using troops.

East African leaders called on all sides in the conflict to meet before the end of the year.