Update Required To play the media you will need to either update your browser to a recent version or update your Flash plugin.
By Bryan Lynn
04 August 2021


New research shows that factory activity across Southeast Asia fell sharply in July because of increasing cases of the coronavirus's Delta variant.

The results were based on a series of business surveys completed this week. The economic difficulties were also linked to slow progress in coronavirus vaccinations in many Southeast Asian nations. 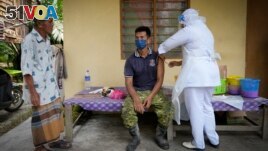 Economic experts say the big drop in factory production threatens growth in some of the world's most resilient markets. Southeast Asia has survived several major economic crises in the past, partly because its nations have enacted economic reforms and the area is close to China.

But the continuing coronavirus pandemic –- driven by a recent rise in infections of the Delta variant –- is creating new problems.

"Populations in these countries could remain vulnerable not only to the current outbreak, but any future mutations that may develop," HSBC said in a statement. Virus-related restrictions are likely to continue, the bank said, leaving many factories without workers.

Thailand is Asia's fourth-largest auto exporter and a production base for major world car brands. But Toyota suspended production in July at three of its factories in the country because of parts shortages caused by the pandemic.

Siam Agro-Food Industry, a Thai processed fruit exporter, depends heavily on migrant labor. But it has only been able to fill 400 of 550 positions as workers return to their home countries and are not able to come back to work because of closed borders.

The company's president, Ghanyapad Tantipipatpong, spoke to Reuters news agency. She said: "There are 350 tonnes of fruit per day, but now we can take only 250 tonnes because of not enough workers to process."

In Vietnam, several big international companies including Samsung, Foxconn and Nike, have production operations in the country. In the south, pandemic restrictions have forced some businesses to keep workers isolated at their production centers at night.

Malaysia supplies about 67 percent of the worldwide rubber glove market. But pandemic restrictions forced much of those operations to halt production in June and July.

An appeal by the country's glove-making association led to eased restrictions that permitted 60 percent of the workers to return. The association is now calling for a full return.

Factory slowdowns in Southeast Asia have already caused problems in other countries, including in Germany. German electronics maker Infineon Technologies said it is expecting losses of millions of dollars from shutdowns at its Malaysia factory. The production problems will also affect Infineon's automotive customers, the company said.

Daniel Bernbeck is head of the Malaysian-German Chamber of Commerce and Industry. He said Malaysia's current quarantine rules have made it difficult for manufacturers of costly products like computer chips to provide the needed technical knowledge.

Reuters reported on this story. Bryan Lynn adapted the report for VOA Learning English. Mario Ritter, Jr. was the editor.

resilient – adj. strong enough to recover quickly after a crisis

glove – n. a piece of clothing that covers the hand

customer –n. someone who buys goods or services from a business