Update Required To play the media you will need to either update your browser to a recent version or update your Flash plugin.
By George Grow
11 May, 2017


President Donald Trump and his administration have been reaching out to Southeast Asian countries in recent weeks.

A new study suggests that trust between Southeast Asia and the United States is at a low point.

The study is called "How Do Southeast Asians View the Trump Administration?" It was a project of the ASEAN Studies Centre at the ISEAS-Yusof Ishak Institute in Singapore. Yusof Ishak was Singapore's first president. 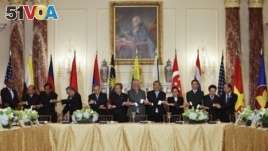 Secretary of State Rex Tillerson, center, meets with foreign ministers from Southeast Asia as they do the "ASEAN handshake" during a meeting of the Association of Southeast Asia Nations (ASEAN) at the State Department, Thursday, May 4, 2017, in Washington. (AP Photo/Jacquelyn Martin)

About 43 percent of those questioned said the Trump administration was "not interested" in Southeast Asia. Thirty-seven percent said the opposite. About the same number of people said they expected U.S. dealings with Southeast Asia to decrease. They also said the United States was "undependable" as an ally compared to four months ago.

The Trump administration has sought to ease such concerns. Last week, Secretary of State Rex Tillerson held meetings with ASEAN foreign ministers and top officials with the 10-member group. It was the first time a U.S. secretary of state hosted such talks in Washington, D.C.

The visitors took part in discussions on trade, North Korea and the South China Sea. They even went to a baseball game.

The first 100 days of the Trump administration were marked by a lack of high-level U.S. contacts with Southeast Asia. The area enjoyed strong ties with the United States during the presidency of Barack Obama. With his invitation to the ASEAN officials, Tillerson wanted to improve ties.

"The secretary underscored that the region remains a very important partner for the United States, in fact a strategic partner," said W. Patrick Murphy on May 4. Murphy is the deputy assistant secretary for the bureau of East Asian and Pacific Affairs.

Before the gathering, Trump invited the leaders of Singapore, Thailand and the Philippines to the White House. The U.S. leader is expected at two meetings in November: one with ASEAN leaders, the other with members of the Asia Pacific Economic Cooperation group, or APEC.

But the survey found that that only 10 percent of respondents think Trump will "definitely" attend the two meetings. Another 38 percent think his attendance is likely, while 32 percent said it is unlikely.

The ASEAN Studies Centre noted the answers do not represent public opinion in Southeast Asia, which is home to 600 million people.

The head of the center, Tang Siew Mun, said the Trump administration getting poor ratings in Southeast Asia was expected. But what surprised him was the "intensity" of the respondents' opinions.

"The survey shows an obvious lack of confidence in the U.S. and its dependability as an ally has also taken a beating," he wrote in an email.

He added that the survey should not be seen as a rejection of the U.S. in Southeast Asia, but as a call for more involvement from Washington.

Most of the survey's answers came from Myanmar, the Philippines and Vietnam. Yet all 10 countries in ASEAN were represented.

One of the countries, Myanmar, and the United States strengthened ties during the Obama presidency. Foreign Minister and State Counselor Aung San Suu Kyi did not attend the meeting last week in Washington. She instead sent her national security adviser with a letter for Tillerson.

Both governments said her inability to attend was just a result of conflicting schedules. She was in Europe last week. But observers say her absence was evidence of the different treatment Myanmar received under Obama. He visited the country twice and invited Aung San Suu Kyi to the White House.

Joe Freeman wrote this story for VOANews. George Grow adapted his report for Learning English. Caty Weaver was the editor. We want to hear from you. How involved in Southeast Asia do you think the United States should be? Write to us in the Comments Section or on 51VOA.COM.

strategic – adj. necessary or important to completion of a plan

definitely – adj. of or having set limits; unquestionable

host – v. to entertain guests socially or as a job

absence – n. a state or condition in which something is absent