Update Required To play the media you will need to either update your browser to a recent version or update your Flash plugin.
By Bryan Lynn
21 July, 2016


Officials in India's southern state of Kerala have placed a tax on hamburgers, pizza and other fast food.

The 14.5 percent tax will be added to foods at restaurants such as McDonald's, Pizza Hut and Burger King.

The tax is being called a "fat tax" because it adds cost to foods considered high in fat and calories. It is the first fast food tax enacted in India, where obesity levels are rising in the growing middle class.

Kerala's Finance Minister Thomas Isaac proposed the tax after learning of similar measures in other countries. He hopes it will get people to choose to eat healthy food, which he said is "going out of fashion."

Dr. Anoop Misra heads the Center for Diabetes, Obesity and Cholesterol at New Delhi's Fortis Hospital. He strongly supports the "fat tax" as a way to reduce the number of diabetes cases in young people.

A government finance official in central Gujarat state told the Times of India the state is considering a similar 14.5 percent tax. "This idea can also be adopted in the state, as we also have high consumption of junk and unhealthy food. The ‘fat tax' can be used as a tool to raise awareness of the harmful effects of junk food," the official said.

Critics of the tax say it probably will not stop people from buying fast food. Some also believe the government is only using it to raise revenue. Officials in Kerala reject that idea. They say overall collections from the tax will be small.

The "fat tax" will not cover local street vendor food that also can be high in fat and calories. The owner of a small restaurant in Kochi told VOA this is not fair. 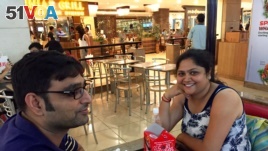 I-T engineer Gaurav Singh wants the government to focus on education and awareness instead of taxing fast food.

"The one food that is eaten widely in Kerala is the ‘paratha,' which is basically high in fat, high in refined flour, high in trans fats, and it is cheap. It can't be taxed because it is highly unorganized."

Some doctors and health experts say the tax should also include other snack foods and sugary drinks sold across the country.

Sheela Krishnaswamy is a nutritionist who heads the Indian Dietetic Association in Bangalore. "Is it enough? I don't think so. I think we need to go much beyond the burgers and doughnuts and the french fries."

One fast food customer in New Dehli, Vijay Deoli, told VOA the government should deal with more important issues. "First you have to clear up the air, the water, many things are there. This is a small thing."

Others say the government should do more to bring attention to fast food and obesity rather than changing people's choices.

Many health experts agree that bringing attention to the issue is important. But Dr. Misra said education alone does not work.

He compared the tax to a law passed several years ago that got people to wear seat belts to avoid paying a fine. "A certain amount of regulation has to be brought in to change the habits of the people."

Anjana Pasricha reported this story for VOANews. Bryan Lynn adapted it for Learning English. Additional information came from the Associated Press. Mario Ritter was the editor.

We want to hear from you. Do you think fast food should be taxed? Write to us in the Comments section, and visit 51VOA.COM.

obesity – n. having too much fat in the body, overweight

diabetes – n. a disease that prevents the body from properly controlling the amount of sugar in the blood

critic – n. person who expresses disagreement about something

revenue – n. money earned by or paid to a business or government

vendor – n. person who sells goods, especially on the street

seat belt – n. a strap on a vehicle's seat that holds a person in place if there is an crash