Space Missions to Watch in 2023

Update Required To play the media you will need to either update your browser to a recent version or update your Flash plugin.
By Bryan Lynn
08 January 2023


2022 was a busy year for the United States National Aeronautic and Space Administration and 2023 promises more space progress. Today, we look forward to some of NASA's planned missions.

One of NASA's major missions last year resulted in a successful uncrewed test flight that sent the Orion spacecraft into orbit around the moon. The mission is part of the space agency's Artemis program, which aims to land American astronauts on the moon by the mid-2020s. 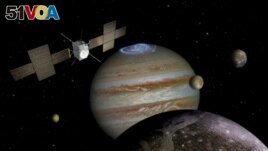 An artist's illustration depicts the ESA's JUICE spacecraft, which will make detailed observations of Jupiter as well as its three large moons, Ganymede, Callisto and Europa. (Image Credit: ESA)

In preparation of that goal, NASA has contracted with private companies to build landers for the moon. Their design permits them to carry equipment and instruments for studying conditions on the lunar surface.

Several landers are expected to arrive on the moon this year. One, developed by NASA partner Intuitive Machines, is set to launch in early to mid-2023. The IM-1 mission will land at an area called Schroter's Valley on the near side of the moon.

Another, built by NASA partner Astrobotic, is to launch sometime before April. The space agency said that spacecraft, called the Peregrine Lunar Lander, is expected to land near Lacus Mortis, an area near the equator of the moon.

The landers' instruments will collect data on and examine many parts of the moon's atmosphere and surface. In addition, they will study things like how radio signals behave on the moon and will test landing technologies and communication systems.

The European Space Agency (ESA) plans to launch a spacecraft to explore Jupiter, the largest planet in our solar system. Jupiter is a giant gas planet, with an atmosphere made up mostly of hydrogen and helium.

ESA officials have said they plan to launch the Jupiter Icy Moons Explorer spacecraft, called JUICE, sometime in April. The mission will make detailed observations of Jupiter as well as its three large moons, Ganymede, Callisto and Europa.

ESA says it hopes the in-depth observations will help scientists learn more about Jupiter's complex environment as they use the planet as a model for other gas giants across the universe.

NASA plans to launch its Psyche spacecraft in early October. It is expected to travel three-and-a-half years to an asteroid. The metal asteroid is orbiting the sun between Mars and Jupiter. NASA wants to study it. Scientists believe it may have separated in violent crashes during the creation of the solar system.

The other will be a return mission of NASA's OSIRIS-Rex spacecraft. It spent more than two years observing an asteroid named Bennu. In October 2020, the spacecraft successfully collected sample material from the asteroid.

OSIRIS-Rex is now on a trip back to Earth, with an expected arrival in September of 2023. Scientists say they hope the sample can help them better understand how planets formed, as well as how life might have developed on Earth.

Boeing's Starliner spacecraft is set to attempt its first crewed test mission to the International Space Station (ISS) in April. The test is the last step in the process before NASA approves the spacecraft to carry out regular missions to the ISS. Private American company SpaceX, another NASA partner, has been transporting astronauts and materials to the ISS since 2020.

Starliner completed its first uncrewed flight test to the ISS in May. But Boeing experienced several technical difficulties with the spacecraft during the mission and has worked with NASA to fix the problems as it prepares for the planned crewed flight.

The first mission is called Quesst. It involves a NASA research plane called X-59, a supersonic aircraft. Supersonic is a term for an object that travels faster than the speed of sound.

The goal of Quesst is to provide data that could change rules that ban supersonic flight over land. NASA says X-59 was developed with technology that reduces the loudness of a sonic boom to very low levels heard on the ground.

NASA's other experimental plane with plans to fly in 2023 is called X-57. The aircraft runs on electric power. It was built to demonstrate that all-electric technology could make flying cleaner, quieter and more sustainable.

Bryan Lynn wrote this story for VOA Learning English, based on reports from NASA, The Associated Press and Reuters.

sonic boom – n. an explosive sound made by an aircraft, bullet, etc. made when something travels faster than the speed of sound