Update Required To play the media you will need to either update your browser to a recent version or update your Flash plugin.
By Jim Dresbach
07 July, 2016


The U.S. space agency has announced it is extending the mission of the New Horizons spacecraft.

The spacecraft will be heading further into what is known as the Kuiper Belt. The Kuiper Belt is an area beyond the planets where there are asteroids and comets.

The spacecraft is expected to reach the object on January 1, 2019. NASA says the 2014 MU69 is more than one and a half billion kilometers beyond the orbit of Pluto.

NASA calls 2014 MU69 "one of the early building blocks of the solar system".

Jim Green is NASA's director of Planetary Science. He said, "The New Horizons mission to Pluto exceeded our expectations." He added that NASA is looking forward to continuing explorations with the spacecraft.

"We're excited to continue onward into the dark depths of the outer solar system," he said.

Green said scientists did not know about 2014 MU69 when New Horizons was launched. New Horizons left Earth in January of 2006. 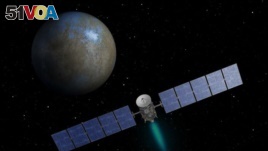 NASA also said it was keeping the Dawn spacecraft in orbit around the dwarf planet Ceres. Ceres is much closer to Earth. It orbits the Sun between the planets Mars and Jupiter.

Green said Dawn will continue to observe Ceres in an effort to make more discoveries.

Dawn was launched in September of 2007.

What do you think about America's latest trip into space? We want to hear from you. Write to us in the Comments Section or visit our 51VOA.COM.

dwarf planet – n. a body that looks like a small planet but lacks certain requirements allowing it to be called a planet

asteroid – n. any one of thousands of small planets that orbit the sun

comet – n. an icy object in outer space that can develop a long, bright tail made of dust when it passes near the sun