Space Race is No More, 45 Years after Moon Landing


Forty-five years ago, humans visited another world for the first time. Two American astronauts stepped out of their spacecraft and onto the moon. This happened during a fierce competition in space technology between the U.S. and the former Soviet Union. The time period is known as the Space Race.

The Space Race began in the 1950s during the period of political and military tension called the Cold War between the U.S. and the Soviet Union. Alexander Laveykin is the deputy director of the Memorial Museum of Cosmonauts. He is also a former cosmonaut, the Russian term for space explorer. He says the Space Race was as much about politics as it was about science.

In this July 20, 1969 file photo provided by NASA, astronaut Edwin E. Aldrin Jr. walks on the surface of the moon.

"There was a big competition between us and America: who will launch the first space satellite? It turned out, we were the first ones."

The Soviet Union launched the first man-made satellite, Sputnik, in 1957. It was a 58 centimeter metal ball with four wire transmitters. The satellite circled the Earth and transmitted a simple signal. The American public did not like hearing about the Russians' success.

In 1958, the U.S. launched its first satellite called Explorer 1. But the Soviets again moved ahead in the Space Race. In 1961, Yuri Gagarin became the first person to orbit the Earth. He returned to the Soviet Union as a hero. 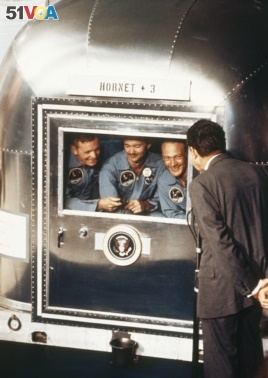 "On the United States side, I think there is a bit of hubris that we can do anything better."

On July 20, 1969, American Neil Armstrong became the first person to walk on the moon.

The space race slowed and moved toward cooperation in the 1970s. The United States and the Soviet Union conducted their first joint space mission in 1975. Doug Millard works at London's Science Museum. He says building the International Space Station and the decline of Communism in the Soviet Union helped end the Cold War.

Kathleen Lewis says current tensions between the US and Russia do not seem to affect their cooperation in space.

"You don't want to be arguing politics when you're up in a tin can 200-and-some miles [325 km] above Earth. You have nowhere to go, so you've got to focus on things that you can agree on and avoid the things that you might have disagreements on."

Currently, the American and Russian space agencies do not have plans for increased cooperation. But their competitive space race is now a thing of the past.

This report was written for Learning English by Jonathan Evans based on a report by VOA reporter George Putic in Washington D.C.