Update Required To play the media you will need to either update your browser to a recent version or update your Flash plugin.
By Bryan Lynn
21 July 2021


As the race to launch space tourism flights continues in the United States, two small American towns have entered the action.

On Tuesday, American billionaire Jeff Bezos flew to the edge of space on a rocket built by his company Blue Origin. Three other people took the quick trip with him: Bezo's brother, a Dutch teenager and an 82-year old pilot.

The space tourism trips permit passengers to experience weightlessness and observe Earth for a few minutes after crossing into space. 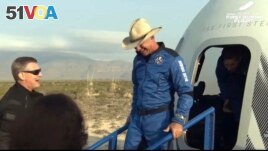 On July 11, British billionaire Richard Branson made a similar trip. He flew on a rocket plane built by the company he founded, Virgin Galactic. Two pilots and three company officials joined him.

The flights by Branson and Bezos officially launched a new industry that promises any citizen the chance to visit space. Such trips will be costly, however. Virgin Galactic's price for a single flight is $250,000 and Blue Origin has not yet announced its rate.

Both businesses established operating bases, called "spaceports" in rural areas of the U.S.

Virgin Galactic's 70-square kilometer Spaceport America is in the desert near the town of Truth or Consequences, New Mexico. About 5,800 people live in the town.

Blue Origin's New Shepard flight operations center is outside the Texas town of Van Horn, home to about 1,800 people.

As Blue Origin's flight took off, some locals watched from Van Horn High School, about 40 kilometers from the launch site. Angel Herrera, who lives in nearby El Paso, was there. He told The Associated Press the experience gave him "goose bumps." He added: "The hair on the back of my neck stood up, just witnessing history."

A pizza shop owner in Van Horn, Jesus Ramirez, also watched the launch, which he called "a ride only for the wealthy." However, Ramirez said he hoped Blue Origin would bring other companies to town and increase business for existing local companies.

Valentina Muro works at a local eatery in Van Horn. She said the "buzz" of the event had "kind of put Van Horn on the map a little more than it was."

For many years, the official welcoming sign for Van Horn has read: "Farming, ranching, mining." While some of these activities are still there, local officials are now looking to space tourism as a way to possibly lift the economy.

"Our biggest driving force is in the tourism dollar," Van Horn Mayor Becky Brewster told the AP. She said that while employees of Blue Origin had been working in the area since 2005, they started to become more involved in the community in the last several years.

"When they were in the development stages, Blue Origin was so secretive about what was going on, their people couldn't really socialize because they couldn't talk about their work and things like that," Brewster said. "It was like, here are the Blue Origin people and here are the Van Horn people. But that's starting to change for the better."

Virgin Galactic's Spaceport America is about 30 kilometers from Truth or Consequences. Sandra Whitehead, the town's mayor, spoke about the importance of Branson's local launch to the Albuquerque Journal. "Spaceport (America) has been in the works for over 20 years, and this is finally the launch that we have waited for," she said.

The town's economy mainly depends on tourists visiting its hot mineral springs and nearby Elephant Butte lake. Now, locals are hoping Virgin Galactic will draw a continuous flow of visitors to support the local economy.

When locals Val Wilkes and her wife Cydney bought a small hotel in Truth or Consequences 10 years ago, they named it the Rocket Inn. Now, Wilkes says, "I love living around the corner from where science fiction is becoming science fact."

Hotel bookings have improved as pandemic restrictions have eased, and Wilkes expects this to continue throughout the town. When asked if people may choose to stay in larger cities in connection with visits to Virgin Galactic, Wilkes predicted: "If people want to come to our town, they'll come."

Bryan Lynn wrote this story for VOA Learning English, based on reports from The Associated Press, Reuters, the Albuquerque Journal, Virgin Galactic and Blue Origin. Caty Weaver was the editor.

goose bumps – n. a roughness on the skin produced by a sudden feeling of cold, fear or excitement

buzz – n. a feeling of excitement, energy or pleasure

ranching – n. the activity of keeping animals on a ranch (a very large farm)

stage – n. a period of development