Update Required To play the media you will need to either update your browser to a recent version or update your Flash plugin.
By Dan Friedell
02 September, 2016

No one was injured when a Falcon 9 rocket exploded at Cape Canaveral in Florida on September 1.

But the rocket and a communications satellite on it were destroyed.

The Falcon 9 belonged to the American company SpaceX. It designs, manufactures and launches rockets and spacecraft.

The hashtag #SpaceX continues to trend on Twitter as people see videos of the explosion.

Space X was hoping to launch the rocket on Saturday, September 3.

The satellite was supposed to provide high-speed internet service to parts of Africa. It was made by an Israeli company for Facebook, the world's largest online social media network. Reports say a replacement satellite could be ready in three years. 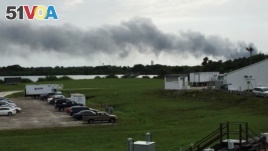 Smoke rises from a SpaceX launch site Thursday, Sept. 1, 2016, at Cape Canaveral, Fla. NASA said SpaceX was conducting a test firing of its unmanned rocket when a blast occurred.

The accident involves two of the world's most famous entrepreneurs.

SpaceX is owned by Elon Musk, a businessman and investor. He also operates Tesla Motors, the electric car company.

SpaceX called the explosion "an anomaly."

SpaceX rockets are unique because some of their parts are reusable. After a rocket launch, the first part of the rocket returns to Earth and can be used again.

The company had planned six more launches this year. But those plans may change after the accident.

People living near Cape Canaveral said their homes shook and sliding doors fell to the ground.

One Instagram user posted video of the smoke cloud from the explosion. A simple, written message placed next to the video read: "Wow, not good."

One Twitter user wrote: "This video of the #SpaceXExplosion is crazy!"

The American space agency NASA is working with SpaceX on several projects, including transporting supplies to the International Space Station. But the space agency was not involved in this project.

NASA did post a message on Twitter. It read: "...spaceflight is challenging. Our partners learn from each success & setback."

A Twitter user sympathized with Facebook's chairman, writing: "Mark Zuckerberg is like ‘Man, I should have gone with NASA.'"

What do you think of the SpaceX explosion? We want to hear from you. Write to us in the Comments Section or on 51voa.com.

anomaly – n. something that is unusual or unexpected