Update Required To play the media you will need to either update your browser to a recent version or update your Flash plugin.
By Alice Bryant
14 March 2021


The Spanish government on Thursday approved a law that classifies food delivery riders as employees of the companies they work for. The law is meant to protect the workers and ensure they get better pay during low-demand hours.

Before the law was approved, companies operating food delivery apps had classified these riders as self-employed.

The change could have far-reaching effects on Spanish businesses. 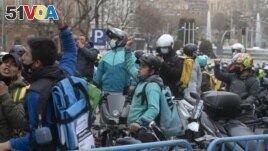 Delivery riders protest outside the Spanish parliament in Madrid, Wednesday March 3, 2021.The Spanish government announced on Thursday March 11, 2021, legislation that classifies food delivery riders as employees of the digital platforms they work for, no

The new law also requires the companies to provide labor unions with details about their digital processes. That includes how company algorithms and AI systems assign jobs, judge worker performance and do other things.

Yolanda Díaz is Spain's Minister for Labor. She said the new law is part of "a modernization of the labor market" in Spain. That includes updating laws as new technologies develop to make sure workers' rights are upheld. She said the rule on disclosing digital processes helps prevent "algorithmic punishments" to workers.

The legal changes are the latest affecting companies and workers in the self-employed economy. Last month, Britain's top court ruled that Uber drivers should be classed as "workers" and not as self-employed. That measure was seen as a major problem for the company.

The Spanish government agreed on the new law with the country's main business groups and labor organizations. The law is expected to take effect within months.

But the law was quickly opposed by a business group that represents digital food delivery companies. And some riders themselves say they would rather have the freedom of being self-employed.

The Association of Service Platforms said that the rule on disclosing algorithms will "undoubtedly" harm the "digital economy in Spain."

In a statement, the Association said the rule is an attack on "the freedom to do business and [on] intellectual property rights."

The law came about after a court case brought by a former rider for Glovo. Last September, Spain's Supreme Court ruled that food delivery riders are employees, not self-employed workers.

The company Deliveroo, which operates in Spain and other countries, is based in London. It urged the Spanish government to think again and warned it about the law's effects in a statement. It said the law would lead to less work for riders, hurt the restaurant industry and "restrict the areas where platforms can operate."

Uber, which operates the Uber Eats service, said it is "fully committed to raising the standard of work." It said it is also committed to giving independent workers more benefits while letting them keep their freedom and control. An Uber statement said thousands of its food deliverers had just protested across Spain to demand they be able to stay independent.

The Associated Press reported this story. Alice Bryant adapted it for Learning English. Hai Do was the editor.

app – n. a computer or phone program that performs a special function

algorithm – n. a set of steps that are followed in order to complete a computer process

AI – n. the power of a computer to copy intelligent human behavior

assign – v. to give someone a particular job or duty

association – n. an organized group of people who have the same interest or job

platform – n. a program or set of programs that controls the way a computer works and runs other programs