Update Required To play the media you will need to either update your browser to a recent version or update your Flash plugin.
By Bryan Lynn
24 September, 2019


Spain's highest court has ruled the government can remove the remains of Francisco Franco from their current resting place.

The Supreme Court rejected an appeal by Franco's relatives who sought to block the removal. The ruling could end years of debate over the burial place of the man who still divides Spanish public opinion nearly 44 years after he died.

Francisco Franco ruled Spain from 1939 until his death in 1975. His body lies inside a huge mausoleum at the Valley of the Fallen, on a mountainside about 50 kilometers outside Madrid.

Franco took power at the end of the Spanish civil war. He led rebel military forces against supporters of the conservative-backed government. An estimated 500,000 people were killed in the fighting.

Left-wing parties and families of those killed by Franco's forces want his remains removed from the huge mausoleum. They want the remains moved to a cemetery near Madrid, where Franco's wife and other family members are buried.

The mausoleum is a popular stop for visitors to the Spanish capital. About 34,000 people from both sides in the civil war – most of them unidentified - are also buried there. 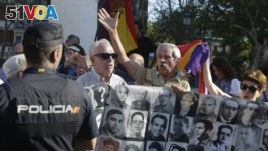 Opponents of moving Franco's remains have argued it could reopen old wounds from the war.

Prime Minister Pedro Sanchez, a Socialist, praised the court ruling as "a great victory for Spanish democracy." He added that his government would seek to move the remains as soon as possible.

Family and supporters of the former dictator criticized the court ruling. They promised to keep fighting to have the decision overturned.

Experts estimate that the bodies of more than 100,000 Franco opponents who were killed in the civil war are buried in 2,500 mass graves nationwide. They say another 740 mass graves and 9,000 bodies were removed from across Spain since 2000.

Some Spaniards have said the Valley of the Fallen was created as a huge memorial to Franco. It was built in part by the forced labor of about 20,000 political prisoners during his rule.

Spain will face its fourth election in four years in November. The removal of Franco's remains had long been a Socialist Party promise. The party's critics have accused the government of seeking to move Franco for political purposes.

Bryan Lynn wrote this story for VOA Learning English, based on reports by Reuters, The Associated Press and Agence France-Presse. George Grow was the editor.

mausoleum – n. building where people's remains are kept for burial

back – v. to support

left-wing – n. the socialist or liberal part of a political party or political system