Update Required To play the media you will need to either update your browser to a recent version or update your Flash plugin.
By VOA
28 May 2022


Thousands of college students around the United States finally came together in person to celebrate the completion of their studies without face coverings, virus tests or pandemic restrictions.

Some graduates from the past two years also joined the class of 2022 to receive their degrees in the traditional graduation ceremony, known as commencement. They listened to speeches from other students, university leaders and in many cases, well-known people from the world of music, politics, medicine and sports. 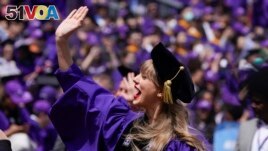 Taylor Swift waves to students at NYU's commencement on May 18, 2022. (AP Photo/Seth Wenig)

At the New York University ceremony on May 18, they listened to a speaker who had left high school after 10th grade and never attended college: Taylor Swift.

Swift began her music career at 15 and is now one of the most popular singers in the world. At NYU, she finally received her degree, an honorary Doctor of Fine Arts.

"I'm 90 percent sure the main reason I'm here is because I have a song called 22," she told the graduates gathered in the famous Yankee Stadium. "I, in no way feel qualified to tell you what to do. You've worked and struggled and sacrificed and studied and dreamed your way here today..."

Swift added that she is not the kind of "doctor" you would want in case of a medical emergency, unless "you needed a person who can name over 50 breeds of cats in one minute."

Antonio Vasquez completed his studies at NYU in 2020 but did not have a traditional graduation ceremony. The university had a special ceremony for the students from 2020 and 2021. Walking among the thousands of people wearing purple, the school color, he said he had a question in mind:

"Well how do you give a commencement speech two years after you've graduated? It's sort of just like: ‘Hope you have a job by now,' right? But they did a really good job. The ceremony itself was well done and really provided some closure for me."

At Princeton University in New Jersey, graduates listened to a real doctor during the school's graduation week event on May 23 known as Class Day.

Dr. Anthony Fauci, the well-known infectious diseases expert, told the students to fight against "the normalization of untruths" and unfair access to healthcare. He said that many who died after getting sick from COVID-19 did not have access to medical care, good housing or healthy food. He said many parts of a difficult life in the U.S. are related to "undeniable racism that (continues) in our society."

Class president Santiago Guiran was the student speaker. Guiran said, "There are two empty seats in the crowd right now." They would have been for his grandparents in Colombia who died after getting sick from COVID-19. He said the sense of friendship and community he felt with his classmates helped him through "the hardest year of my life."

At a university in Florida, Rollins College, the student speaker made news, but did not say a word.

Elizabeth Bonker was the top student in her class. Bonker, however, has autism, which prevents her from speaking. She has not used her voice since she was 15 months old. She used computer software that turns typed words into speech to talk to her classmates.

She said the technology permitted her to complete school and free her mind from "a silent cage." In her speech, she advised her classmates to work to help other people throughout their lives. "We are called to serve," she said, and "to see the worth in every person we serve."

In Atlanta, Georgia, movie maker and actor Tyler Perry spoke to graduates at Emory University. Perry told students that even though they are done with school, they should continue to look for "professors" in other parts of their lives. They should seek the advice of experts and not run away from the feeling of "pressure" that comes when working to accomplish their dreams.

"For some, it takes a while to build a dream," Perry said.

Stacey Abrams, who is campaigning for governor of Georgia, spoke at Spelman College. A 1995 graduate of the college, she told students to
"be bold" when thinking about what they want to do in the future. She said she learned "to believe that I am capable of whatever I can imagine" during her time at the school.

Other speakers in May included New Zealand Prime Minister Jacinda Ardern, who spoke at Harvard, and U.S. President Joe Biden, who planned to speak at the University of Delaware on May 28. Delaware is Biden's home state.

Dan Friedell wrote this story for Learning English based on university news reports and a story by the Associated Press.

graduate – n. a person who has finished the work required to earn a degree or diploma from a school

closure – n. a feeling that something has been completed

classmate – n. a member of the same class or grade in a school

autism – n. a condition that causes people to have difficulty communicating or forming relationships with other people

accomplish – v. to succeed in doing something

bold– adj. not afraid of danger, showing confidence or lack of fear