Update Required To play the media you will need to either update your browser to a recent version or update your Flash plugin.
By Jeri Watson
27 September, 2014


Could a creature that lived 95 million years ago travel from what is now North Africa to Europe and even to North America? Yes, but it probably was not easy.

It happened when scientists in all those areas studied fossilized remains of an African dinosaur. And because they did, the fossils were identified as those of Spinosaurus aegyptiacus.

Paleontologists learned to build the skeleton of Spinosaurus. That led to a life-size replica or copy of the ancient creature. Scientists say it grew bigger than a more famous dinosaur, Tyrannosaurus Rex.

The replica is currently "living" on display at the National Geographic Museum in Washington, D.C., not far from the White House. 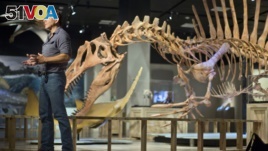 Paleontologists Paul C. Sereno in front of a model of a Spinosaurus

New knowledge about Spinosaurus holds special importance for understanding prehistory. It demonstrates that the creature may have been the largest meat-eating dinosaur that ever lived. And it swam. The new research provides evidence that it could not only live on land, but hunt in water. Most meat-eating creatures that lived before Spinosaurus were land-based.

University of Chicago researchers Paul Sereno and Nizar Ibrahim used computer studies of fossils to create the life-size model of Spinosaurus. Mr. Sereno said the dinosaur's body structure made possible the move from land to waterways.

The only known dinosaur adapted to life in water, Spinosaurus swam the rivers of North Africa a hundred million years ago. (Art: Davide Bonadonna, and Oct. edition of National Geographic magazine)

"From head to tail, it is showing signs of adaptation for a water-loving life. For the first time, we have solid bone evidence for this kind of a lifestyle among dinosaurs."

Spinosaurus had a nostril on the back of its head. That made it possible for the creature to breathe when part of its head was under water. Its long neck and short, powerful back legs helped it swim. But on land, it probably did not walk standing up like other meat-eating dinosaurs. 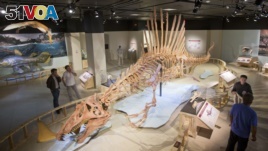 Its back was topped with spines shaped like sails. These bony structures were connected by skin and measured two meters tall. They stood partly out of the water as Spinosaurus swam after food targets including fish the size of an automobile.

Mr. Sereno said at 15 meters, the dinosaur was about three meters longer than the biggest Tyrannosaurus Rex. Earlier, T-Rex had been thought to be the largest meat-eater.

Nizar Ibrahim led an international team of scientists in research on the Spinosaurus. Their report appeared in the journal Science. Mr. Ibrahim said the animal's back legs were probably perfectly created for swimming. And its front legs held sharp claws. It could reach out and seize other swimming creatures with its jaws.

"It ate sharks. But it probably included all kinds of aquatic animals in its prey. And the size of these aquatic animals is probably one of the factors that drove the evolution of the giant-body size in Spinosaurus."

Nizar Ibrahim first learned of the unidentified bones that might have belonged to Spinosaurus in 2008. At the time, he was doing research at the Kem Kem Beds area of Morocco. The site is a favorite of paleontologists because it contains dinosaur fossils buried many million years ago.

One day, Mr. Ibrahim spoke to a Moroccan fossil hunter in a town that was a popular meeting place for hunters and dealers. The man sold him a piece of finger bone and backbone.

Mr. Ibrahim thought the fossil just might be from a Spinosaurus. If that were true, it would shake the world of students of prehistory. The last known partial skeleton of a Spinosaurus was destroyed during World War Two. German paleontologist Ernst Stromer had found the fossils in Egypt about a century before. He had named the dinosaur. But bombs destroyed most of the fossils.

Nizar Ibrahim could not confirm the fossil's identity on his own. Seeking help, he took his modern-day find to a university in the Moroccan city of Casablanca. But scientists there did not recognize it.

His next step took him to Dublin, Ireland, where he had been working on a paper. But he found that he needed to wait for additional material from the creature. So, he returned it to the university in Casablanca.

But good luck was on its way. After some months, he heard that the natural history museum in Milan, Italy might contain that needed additional material. Happily, scientists there had many similar fossils. And they had come from remains of that same animal in Morocco. Nizar Ibrahim led a dig to recover many more of its bones in the Kem Kem area.

Several years ago, Mr. Ibrahim joined Paul Sereno at the University of Chicago. There, the two researchers were able to study and assemble more than a ton of the dinosaur's bones that were shipped to them.

Today crowds are visiting the replica of Spinosaurus as it stands in Washington, DC. It mainly contains man-made materials, but some real bones are included. They will go back to the University of Chicago for more study early next year.

And Mr. Sereno says that after a time, remains of the great creature will return to Morocco. Spinosaurus will be back in the land where it once swam the prehistoric waters. And now, many of its mysteries are solved.

This report was based on stories from VOA reporters George Putic and Faith Lapidus. Jeri Watson wrote the story for VOA Learning English. George Grow was the editor.

paleontologist - n., a scientist who specialized in the fossils of animals that lived long ago, especially in the time of dinosaurs

display - v., to place something so people can see it

hunt - v., to chase and kill wild animals for pleasure or food

site - n., the place where something (such as a building) is, was or will be located

jaws - n., the places where the teeth grow

claws - n., sharp curved parts on the toe of an animal (such as a cat or a bird)

luck - n., the things that happen to a person because of chance

assemble - n., to collect (things) or gather (people) into one place or group