Update Required To play the media you will need to either update your browser to a recent version or update your Flash plugin.
By Dr. Jill Robbins
06 March 2020

This week, we answer a question from a listener in China, who asks:

Question: What is the difference between sports and sport? VOA Fan, China 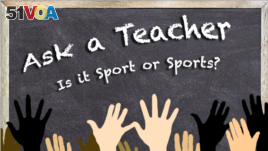 That is an interesting question. I'm sure you know that "sports" can be the plural form of the word "sport." You may not know that we can use the word as a verb or adjective. More on that later.

The simple answer is that in the United States, we use the noun "sport" to talk about any contest or game that involves physical activity. When we talk about "sports" we mean the plural form of the noun. That is how we talk about basketball, football and baseball as a group.

But if you are in Britain, or you speak British English, you would use the noun "sport" to talk about the same group of activities. I looked at the BBC News website and their top menu shows "Sport" for the news about Football, Cricket, Tennis, Golf and so on.

Let's look at some examples. My son is a computer programmer. He says:

A British person who shares my son's opinion would say,

When getting to know someone new, a British person may ask:

Do you do any sport?

That does not sound right to my American ears. I would ask,

Do you play any sports?

Other ways to use ‘sport'

You can also use the adjective "sport" to describe something. If you do not make money by fishing, that it, you only fish for fun, you are a "sport fisherman."

As a verb, "sport" means to wear something. It is mostly used when someone is wearing something that is attention-getting.

He is sporting a bright blue jacket in the photo.

menu – n. a list of things that you can choose from