Sportscaster Robert Lee Moved Off Game Because of His Name

Update Required To play the media you will need to either update your browser to a recent version or update your Flash plugin.
By Bryan Lynn
23 August, 2017

United States Civil War General Robert E. Lee has been in the news a lot lately.

In American history, Lee led the Army of the Confederacy of Northern Virginia from 1862 to 1865.

The Confederacy was a group of Southern slave-holding states that withdrew from the Union and fought for independence from the U.S. government. Lee eventually surrendered, and the states re-joined the Union.

Today, Americans are divided over whether statues of Robert E. Lee should be removed from public places. Some believe the statues represent an important part of Southern history. Others say they glorify traitors to the U.S., as well as America's history of slavery and racial oppression. 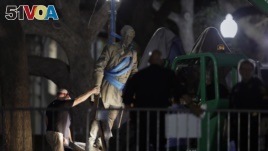 A statue of Confederate Gen. Robert E. Lee is removed from the University of Texas campus, Aug. 21, 2017, in Austin, Texas.

The debate about Lee recently took a dramatic turn.

In February, officials in Charlottesville, Virginia decided to remove a statue of Lee from a public park. Their decision led to a violent demonstration on August 11, in which white supremacists and others opposing the removal of the statue clashed with counter-protesters.

One woman was killed when a white supremacist's car struck counter-protesters.

Now, the controversy over General Lee has a new twist.

Sports network ESPN has decided not to send broadcaster Robert Lee to Charlottesville to cover the University of Virginia's opening football game September 2.

ESPN said the decision was made, together with Robert Lee, "as the tragic events in Charlottesville were unfolding, simply because of the coincidence of his name."

"In that moment it felt right to all parties," the ESPN statement said. It added: "It's a shame that this is even a topic of conversation and we regret that who calls play-by-play for a football game has become an issue."

ESPN's decision drew a huge response on social media, with most commenters criticizing the action or making fun of it.

Many people posted side-by-side pictures of the Civil War general and sportscaster Robert Lee, who is Asian American.

"Yo ESPN, I think viewers will know the difference between Robert E Lee the confederate general and Robert Lee the football announcer," tweeted Josh Jordan.

"Nothing takes a stand against racism better than banning an Asian guy from a TV job because his name is Robert Lee," wrote radio host Dana Loesch. She later tweeted: "Don't tell ESPN about Lee Jeans, the official denim of confederate generals."

U.S. Senator Orrin Hatch also found humor in the story. "If you happen upon a civil war era Orrin Hatch in your reading do not be alarmed, that was also me," he tweeted.

Current ESPN broadcaster Bob Ley took to Twitter to make a joke about his name being similar to the other two Lees. "Rather worried my employee ID/pass may not admit me in the AM."

Bryan Lynn wrote this story for VOA Learning English. His report was based on stories from the Associated Press and other sources. Kelly Jean Kelly was the editor.

We want to hear from you. Do you think ESPN did the right thing? Write to us in the Comments section, and visit 51VOA.COM.

glorify – v. make something seem better or more important than it really is

twist – n. something that happens unexpectedly

coincidence – n. when events happen at the same time in an unexpected way

shame – n. something that is regretted

conversation – n. discussion among people or a group