Sri Lankan Election Tests the Power of the Planets

Update Required To play the media you will need to either update your browser to a recent version or update your Flash plugin.
By Kelly Jean Kelly
19 January, 2015


Mahinda Rajapaksa was elected president of Sri Lanka in 2005 and won re-election in 2010. In 2014, he called for elections again – two years early.

Most people expected him to win another term, including his trusted astrologer. Sumandasa Abeygunawardena has been advising Mr. Rajapaksa for 30 years on how the planets and stars would affect the president's life.

The astrologer called the Sri Lankan leader an "invincible personality and a blessed man." The astrologer said Mr. Rajapaksa would win a great victory on the January 8, 2015 election. 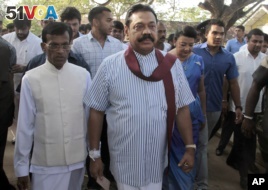 The astrologer was wrong.

Instead, a member of Mr. Rajapaksa's party unexpectedly sought the presidency. Maithripala Sirisena reached out to the opposition and won an easy victory.

Now, the former president's astrologer is out of favor, too. Mr. Abeygunawardena has surrendered his official car. He has resigned as a director of a government bank. Before, he was called the "royal astrologer." Today, few people believe his power to read the planets.

Mr. Abeygunawardena told Agence France Presse that he knew the former president would lose. But, the astrologer said he felt too bad about the news to tell him.

Many people in Sri Lanka believe the position of the planets and stars influences their lives. But one professor says the country's politicians put even greater faith in astrology than most other people.

"When you are in those kinds of positions, it is a very isolating place to be in, and you kind of, you know, cling to these kind of mystical practices in order to get some sense of security."

In recent days, many people on social media have been making jokes about those who predicted the former president's victory. The unexpected election results have also started a debate in the country about how much power astrology should have.

Sasanka Perera is a Sri Lankan anthropologist at the South Asian University in New Delhi.

"This is a country that has a lot of these kind of beliefs going on on a day-to-day basis. But this time, because this is such a high profile thing, it is also getting a lot of flak and I think that is a reasonable thing to happen. Because you cannot have a situation where a country that is, you know, in this time of the 21st century cannot really doing something this serious, depending this much on something like astrology."

Even so, the defeat of Mahinda Rajapaksa and his astrologer's failure to predict the future will probably not shake most people's beliefs in the power of the planets.

This story was based on a report from VOA' s Anjana Pasricha in New Delhi. Kelly Jean Kelly wrote it for VOA Learning English. George Grow was the editor.

out of favor – phrase no longer popular

cling – v. continue to believe in or depend on something

mystical – adj. having a spiritual meaning that is difficult to see or understand

Do you believe that astrology can be accurate? Have the positions of the planets and stars influenced your life? We want to hear from you. Write to us in the comments section.