Sri Lanka to Use Wasted Rainwater for Crops, Power

Update Required To play the media you will need to either update your browser to a recent version or update your Flash plugin.
By VOA
02 August, 2015


Sri Lanka plans to store and use a billion cubic meters of rainwater each year to support irrigation and power generation. The rainwater would go into the sea if it is not used.

Sri Lanka is building the new water management system in the country's dry zone. The area covers the northern and eastern parts of the country. It is home to about one-third of Sri Lanka's twenty million people. It is also mainly agricultural land.

Climate change has severely hurt the area in the past 10 years. The region is also is suffering a severe water crisis. 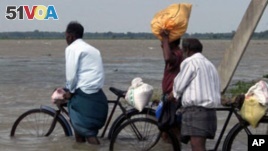 Experts say the project could use enough water to fill two of the country's largest reservoirs, Victoria and Randenigala.

The government and donors are paying for the $675-million project. Work begins this month and should be completed by December 2024.

The plan is one of the nation's largest water-related projects in the past years. It includes the construction of two new reservoirs and 260 kilometers of new canals linking existing reservoirs.

The aim is to help the dry zone better control its water supply for power generation and farming.

S. Shanmugasivanathan is a top official with the Department of Irrigation. He said that rain patterns have been changing and the dry zone is getting less water now. He said Sri Lanka needs to make the most of the water usage.

The country's rainfall is 2,000 millimeters per year. Less than half falls in the dry zone. Most of the farming there depends on irrigation. Small water tanks hold water from the region's large reservoirs.

Mr. Shanmugasivanathan said the dry zone faces the extremes of floods and drought as the rain patterns have changed. But, he said there is no system in place to capture flood waters, so drought can happen even in years of floods.

Water to fight against poverty

A water infrastructure project for the dry zone has been in Sri Lankan plans since the 1970s. The Mahaweli Development Program included such ideas for the country's central hills and some of the north.

The idea was to use the waters of the Mahaweli River, the longest in the country, to increase power generation capacity by about 260 megawatts.

It was also designed to provide irrigation water to an additional 131,500 hectares of land.

But civil war delayed the project for 25 years until 2009.

Sri Lankan and Asian Development Bank officials said the new water management project is based on the Mahaweli plans. The ADB is providing $453 million in funding.

The international lender also estimates that 70 percent of the dry zone's population depends on agriculture. The average yearly earnings of the people there is 10 percent lower than in other parts of the country.

Lance Gore is a water resources expert with the ADB in the Philippine capital, Manila. He said the organization hopes that the new project will help end poverty in the area. The water expert said more water will increase the earning level of people dependent on agriculture. It also aims to supply safe drinking water to 350,000 people.

Reuters provided this report. Triwik Kurniasari adapted it for Learning English. Caty Weaver was the editor.

zone – n. an area that is different from other areas in a particular way

reservoirs – n. usually human-made lake is used to store a large supply of water for use in people's homes, businesses, etc.

pattern – n. something that happens in a regular way

drought – n. a long period of time during which there is little or no rain