Update Required To play the media you will need to either update your browser to a recent version or update your Flash plugin.
By Dan Novak
18 July 2022

"The acting president further explained that negotiations with the International Monetary Fund (IMF) were nearing conclusion, and discussions for assistance with foreign countries were also progressing," Wickremesinghe's office said in a statement.

Late Sunday, Wickremesinghe declared a state of emergency as Sri Lanka continues to face a deep economic crisis. The move aims to calm unrest ahead of a vote in parliament later this week to elect a new president. 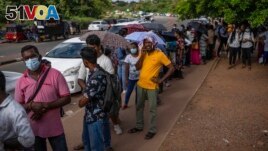 People wait in line to get their passports outside Department of Immigration & Emigration in Colombo, Sri Lanka, July 18, 2022. The Indian Ocean island nation is engulfed in an unprecedented economic crisis that has triggered political uncertainty. (AP Photo/Rafiq Maqbool)

Sri Lanka is seeking a financial rescue plan from the IMF and other organizations. But top officials say the country's finances are so poor that even getting a bailout has been difficult. There has been no comment from the IMF on Wickremesinghe's statement.

The acting president said that aid was being provided to people and steps taken to ease shortages of fuel and cooking gas.

However, he said "elements within society" were causing unrest. He said disorder will not be permitted to harm the country's progress.

Wickremesinghe said that peaceful protesters who had real concerns would be heard by the government. He urged political parties to put aside their differences and form "an all-party government which would permit the country to recover from the economic crisis."

Sri Lanka's leaders have declared a state of emergency several times since April. That was when protests started against the government's reaction to the economic crisis and shortage of necessary goods.

Last week, hundreds of thousands of anti-government protesters came out onto the streets of Colombo and occupied President Gotabaya Rajapaksa's official home and office. He later fled to the Maldives Islands and then to Singapore.

Parliament accepted Rajapaksa's resignation on Friday. It met a day later to begin the process of electing a new president. A vote is expected Wednesday.

The nation received a shipment of fuel providing some aid to deal with the severe shortages.

Wickremesinghe is a six-time prime minister considered an ally of Rajapaksa. He is one of the top candidates to win the presidency full-time. But protesters also want him to resign.

The protesters accuse Rajapaksa and his powerful family of stealing from the government. They also say his poor leadership of the economy led to its collapse. The family has denied the corruption charges, but Rajapaksa has admitted that some of his policies led to the crisis.

bailout —n. the act of saving or rescuing something such as a business or a country

conclusion — n. the act of finishing or completing something