Update Required To play the media you will need to either update your browser to a recent version or update your Flash plugin.
By VOA
20 July 2022

Members of the ruling party hope his government experience will help the country out of the economic and political crisis it is facing. But there is also a risk that the decision will lead to more unrest in the South Asian country. 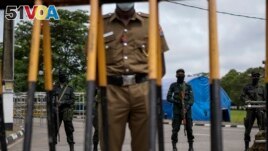 The uprising forced President Gotabaya Rajapaksa to flee the country and resign. The prime minister, Wickremesinghe, became acting president. On Monday, Wickremesinghe declared a state of emergency giving him the power to restore public security and order.

The six-time prime minister received 134 votes in the 225-member parliament. But, given his unpopularity, only a few lawmakers had publicly said they would vote for Wickremesinghe.

Wednesday's vote means Wickremesinghe will finish the presidential term ending in 2024. He will be sworn in on Thursday.

"I need not tell you what state our country is in," Wickremesinghe told lawmakers after his victory was announced. "People are not expecting the old politics from us, they expect us to work together." The 73-year-old leader added, "Now that the election is over, we have to end this division."

After the vote, some supporters celebrated Wickremesinghe's win in the streets. But protesters gathered at the presidential home, calling "Ranil, go home." Visaka Jayawware, a protester, told the Associated Press, "We will keep fighting for the people of Sri Lanka. We have to ask for a general election."

Much of the protesters' anger was directed at Rajapaksa and his family who ruled the country for almost 20 years. But many also blamed Wickremesinghe for protecting Rajapaksa. Last week, a crowd occupied his office and set his home on fire.

Economists say the crisis in Sri Lanka comes from years of poor leadership and corruption. They also say it comes from other troubles, such as growing debt, the effects of the pandemic, and terror attacks that hurt the tourism industry. The country also has $51 billion in foreign debts that it cannot repay.

Before Wednesday's vote, Wickremesinghe said the economy had already collapsed by the time he joined the Rajapaksa government in May.

As prime minister, Wickremesinghe has been working with the International Monetary Fund (IMF) and countries to look for help. He said Monday that negotiations with the IMF were nearing a conclusion, while talks on help from other countries had also progressed. He also said that the government has taken measures to solve shortages of fuel and cooking gas.

"People deserve fuel, transportation, we deserve anything citizens need," Kasumi Ranasinghe Arachchige, a 26-year-old protester, told Reuters. "Until we see no one in Sri Lanka is struggling, the protest continues."

Hai Do dapted this story for Learning English based on reporting from The Associated Press and Reuters. Write to us in the Comments Section or on 51VOA.COM.