Sri Lankan Rickshaw Driver Has to Wait 12 Hours for Fuel

Update Required To play the media you will need to either update your browser to a recent version or update your Flash plugin.
By Jonathan Evans
04 June 2022


Lasanda Deepthi is a 43-year-old Sri Lankan auto-rickshaw driver near the capital Colombo. An auto-rickshaw is a three-wheeled motorized vehicle used for public transport.

Deepthi carefully observes her fuel levels to make sure there is enough before accepting a job. When her fuel tank is almost empty, she joins a line of people waiting to refuel at a gas station.

"I spend more time in line for petrol than doing anything else," she said. "Sometimes I join a line about 3 p.m. but only get fuel about 12 hours later." 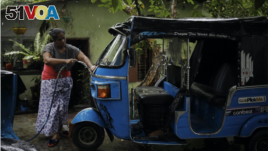 Deepthi added that a few times when she made it to the front of the line, the station had run out of fuel.

In mid-May, Deepthi said she spent two-and-a-half days in a line for fuel, assisted by one of her brothers.

"I don't have words to describe how terrible it is. I don't feel safe sometimes in the night but there is nothing else to do," she said.

Deepthi is one of millions of people in Sri Lanka battling rising inflation and falling wages. The country faces shortages of everything from fuel to medicine during its worst economic crisis since independence in 1948.

Deepthi has been an auto-rickshaw driver for seven years to support her family of five.

Since the financial crisis hit, she has struggled to find enough fuel and earn enough money.

Deepthi usually earns about $138 each month. But her income started falling in January, and she now earns only about half that amount.

Deepthi's goal on most days is simply to find fuel. Fuel prices have increased 259 percent since October 2021.

Many Sri Lankans are angry at the widespread shortages. They accuse the powerful Rajapaksa family of mishandling the economy. Thousands of protesters have taken to the streets across Sri Lanka in recent months for mostly peaceful demonstrations.

New Prime Minister Ranil Wickrememsinghe plans to announce a budget in the coming weeks that will greatly cut spending. He says the plan will redirect the money toward a two-year public aid program.

His policies are also expected to push forward negotiations with the International Monetary Fund for badly needed loans.

But Deepthi remains deeply concerned about her financial future.

The car she bought with her savings had to be sold last year after she fell behind on payments.

A second auto-rickshaw needs repairs and she is more than $280 behind on loan payments for land she bought before the pandemic.

Deepthi also wants to visit her three-month-old granddaughter. But she is not sure how she can travel 170 kilometers to the town where her daughter lives.

"I can barely afford enough rice and vegetables for my family," she said. "I can't find medicines my mother needs. How will we live next month? I don't know what our future will be like."

tourism – n. the practice of traveling for recreation

mishandling – v. dealing with or managing wrongly or ignorantly