Update Required To play the media you will need to either update your browser to a recent version or update your Flash plugin.
By Hai Do
18 October 2022


Sri Lankan writer Shehan Karunatilaka won the 2022 Booker Prize for his novel The Seven Moons of Maali Almeida. The story is about a dead war photographer on a trip to the afterlife.

The Booker Prize is awarded to what is, in the opinion of the judges, the best work of fiction written in English and published in the United Kingdom and Ireland.

Karunatilaka received the award in person from Queen Consort Camilla of Britain on Monday and a $56,000 prize. 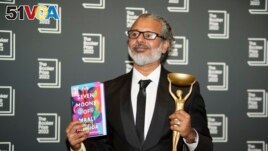 Writer Shehan Karunatilaka holds the Booker Prize after the announcement of the honor for his novel, "The Seven Moons of Maali Almeida" in London, Oct. 17, 2022. (AP Photo/Alberto Pezzali)

The story is set in Sri Lanka during the country's civil war in 1989. It follows a gay war photographer and gambler Maali Almeida, who wakes up dead.

Even in the afterlife, time is running out for Almeida. He only has "seven moons" to find out who killed him and to contact his loved ones still living. He wants to guide them to hidden photos he has taken showing the cruelty of his country's conflict.

In his acceptance speech, Karunatilaka said he hopes people in Sri Lanka who read the novel will understand that, in his works, "corruption, race-baiting and cronyism have not worked and will never work."

Karunatilaka told the prize committee that Sri Lanka's civil war in 1989 was the darkest year in his memory. There was "an ethnic war, a Marxist uprising, a foreign military presence and state counter-terror squads," he said.

The writer said he borrowed teachings from Buddhism and other eastern religions about the afterlife to write the book. He said he "was seeing the afterlife as a visa office, as a government bureaucracy with spirits wandering around, not knowing where they are supposed to go."

"We have this illusion that all our questions will be answered when we breathe our last; you close your eyes, open them and it suddenly all makes sense," Karunatilaka said.

Neil MacGregor chairs the committee of 2022 Booker Prize judges. He said Karunatilaka's book is an afterlife novel about "life and death, body and spirit, east and west."

He said it takes the reader to "the murderous horrors of civil war Sri Lanka. And once there, the reader also discovers the tenderness and beauty, the love and loyalty, and the pursuit of an ideal that justify every human life."

Shehan Karunatilaka is one of Sri Lanka's leading writers. He became well known after winning several awards for his first novel, Chinaman. His work has been published in Rolling Stone, GQ and National Geographic magazines. And he has worked as an advertising writer and played guitar in a band called Independent Square.

Past winners of the Booker Prize, which was first awarded in 1969, include Margaret Atwood, Salman Rushdie and Yann Martel.

Hai Do wrote this story for Learning English with additional reporting from Reuters.

novel - n. a long story about imaginary people and events

gay - adj. sexually and romantically attracted to a person of the same sex

gambler - n. a person who bets money or other valuable things

bait - v. try to make someone angry by criticism or insult

cronyism - n. the unfair practice of giving jobs and favors to friends

bureaucracy - n. system of government that has complex rules and ways of doing things

wander - v. to move around without purpose or direction

illusion - n. something that seems different from what it is

pursuit - n. the act of following something

ideal - n. an idea or standard of perfection or excellence

justify - v. to provide a reason for an action