Update Required To play the media you will need to either update your browser to a recent version or update your Flash plugin.
By Caty Weaver
29 July, 2016


Last week the latest movie in the "Star Trek" series was released. "Star Trek Beyond" made close to $60 million in ticket sales. Although it led movie openings in earning that weekend, it made less than the opening of the last film in the series, "Star Trek Into Darkness."

But critics and movie goers have praised the new movie. Movie business experts expect the film to do well overall.

And it does not hurt that the release comes during the 50th anniversary year of the birth of "Star Trek."

It began as a television series in September 1966.

The show was set in the future. Each week it told stories of the crew on the spaceship USS Enterprise. Actor William Shatner played Captain James T. Kirk, the Enterprise commander. 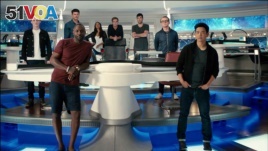 The ship was on a five-year mission to explore space. Week after week, fans watched the Enterprise crew "boldly go where no man has gone before."

In real life, at the time, space exploration was going strong. Russia had launched Sputnik I in 1957. The American Space Agency, NASA, was preparing to send men to the moon.

But "Star Trek" was as much about the real social issues of the time as it was about the fictional future. Huge societal changes were taking place in the U.S. in the 1960s.

Series creator Gene Roddenberry was a progressive thinker. By placing his show in space, he was able to explore civil rights, women's rights, population control and the ethics of war while American troops were fighting in Vietnam.

The show's presentation of the possible technology of the future also appealed to television viewers. Michael Caruso is the editor-in-chief of Smithsonian magazine. The magazine recently held "The Future is Here Festival," in Washington, D.C.

"‘Star Trek' has inspired a tremendous number of new technologies," he said. "There are all kinds of inventions and discoveries that have come out of "Star Trek" and other science fiction."

"Star Trek" was not an immediate moneymaker. NBC studios canceled the show after three seasons. But it remained on television in the form of reruns around the world. It began to gain fans. They began to demand the continuation of the series.

Shatner and other cast members were becoming famous.

Move to the big screen

In 1979, "Star Trek: The Motion Picture" was released to national and international markets. By then, Roddenberry's creation had exploded in popularity worldwide. Shatner said the speed of success was not expected.

"The concept of making more ‘Star Treks' in terms of movies occurred. And each movie, they thought that was the last one. So nobody had any idea of the residual popularity that occurred."

Still, throughout the years, millions of fans stayed loyal to the original show and cast. Many were excited when filmmaker and producer J.J. Abrams brought back the original characters in the 2009 special effects blockbuster, "Star Trek." Abrams kept close to Roddenberry's ideas.

Filmmaker Justin Lin, known for his work in "Fast and Furious," directs the latest installment. He chose to move away from the original Roddenberry characterizations. Lin offers exciting special effects and battles in "Star Trek Beyond."

Penelope Poulou wrote this story for VOA. Caty Weaver adapted it for Learning English. Ashley Thompson was the editor.

Do you have a favorite science fiction movie or series? Tell us in the Comment Section. Or post a message to 51VOA.COM.

inspire – v. to give (someone) an idea about what to do or create

residual – adj. remaining after a process has been completed or something has been removed