Update Required To play the media you will need to either update your browser to a recent version or update your Flash plugin.
By Dan Novak
13 October 2021


Ninety-year-old actor William Shatner, flew into space Wednesday. The performer is known for playing Captain Kirk in the Star Trek television series and films. He is the oldest person to ever reach space.

Shatner was a passenger on a spaceship built by Blue Origin, the company owned by Amazon founder Jeff Bezos.

The Star Trek actor and three other passengers flew about 106 kilometers over the desert of western Texas to the edge of space. The ship operates without a pilot. It spent about three minutes at zero gravity then safely returned to Earth by parachute. The flight lasted just over 10 minutes.

"How about that, guys? That was unlike anything they described," the actor said as the ship came back to Earth.

Shatner broke the record for the oldest person in space by eight years. Pilot Wally Funk set the earlier record in July, also on a Blue Origin rocket.

"This is a pinch-me moment for all of us to see Captain James Tiberius Kirk go to space," said Blue Origin launch commentator Jacki Cortese before liftoff. She said she, like many others, became interested in the space business because of shows like Star Trek.

Bezos is also a Star Trek fan. He once played an outer space creature in one of the later Star Trek movies. Shatner flew on the ship for free as his invited guest. 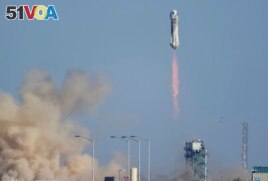 Bezos himself drove the four passengers to the launch area. He closed the ship's door after they climbed into the 18-meter rocket. And he was there to welcome the crew after the ship returned.

"Hello, astronauts. Welcome to Earth!" Bezos said as he opened the door and was hugged by Shatner.

The space tourism industry is quickly growing. Many passengers without government spaceflight training have been able to fly into space recently.

Virgin Galactic's Richard Branson went into space in his own rocket in July, followed by Bezos nine days later on Blue Origin's first flight with a crew. Elon Musk's company SpaceX made its first private flight last month, but without Musk as a passenger. Last week, Russia launched an actor and a film director to the International Space Station to film a movie.

Also on the flight was Audrey Powers, Blue Origin vice president. There were two other passengers who paid: Chris Boshuizen, a former NASA engineer, and software businessman Glen de Vries. Blue Origin would not release the cost of their flights.

After the flight, Shatner told Bezos that he gave him "the most profound experience I can imagine."

Through tears, the actor said, "I'm so filled with emotion about what just happened. It's extraordinary. I hope I never recover from this. I hope that I can maintain what I feel now. I don't want to lose it."

Dan Novak adapted this story based on reporting by The Associated Press. Mario Ritter, Jr. was the editor.

tourism –n. the activity of traveling to a place for pleasure

extraordinary — adj. very unusual; very different from what is normal or ordinary

maintain — v. to cause to continue; to keep going